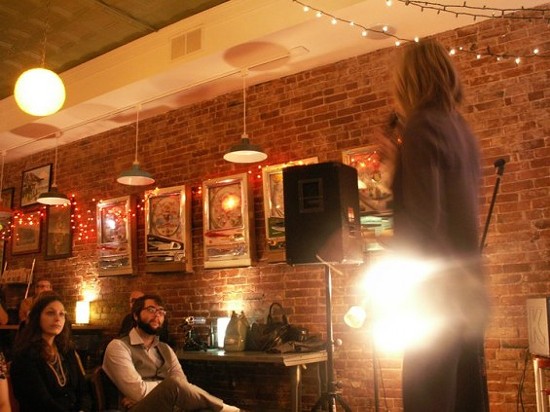 Stacey Wehe has less a bone to pick than a story to share. She has lots of them, actually. The founder of MothUp St. Louis, a local affiliate of cult New York storytelling group The Moth, Wehe peppers her airy anecdotes with a generous dose of the word "wonderful," even as she explains how the local organization and its ideological parent recently ended all bloodlines.

"When we first joined the program, the rules weren't very defined, and the amount of freedom was wonderful," Wehe says. "But they have a contract with the newer groups, and they have a lot more regulations than we did. We had loose guidelines, and they have strict rules now."

Those rules keep affiliate groups from seeking outside publicity or letting meetings grow upwards of 50 people. Those groups, like The Moth in New York, focus on the idea of sharing community, with members telling personal stories to a public audience at nine events each year.

Although MothUp St. Louis started with just twelve people at its first meeting at Foam a year and a half ago, the most recent head count was somewhere around 230 people. Today, some storytellers arrive upwards of 40 minutes early in order to guarantee good seats for an event.

Wehe was contacted by an official from The Moth about the size of the group. She tells Daily RFT she debated the issue with MothUp's system of core volunteers -- the graphic designers, photographers and videographers who help put the stories on the group's YouTube channel -- before deciding last week she'd rather break off into a new group than make MothUp more exclusive. MothUp Atlanta, another early Moth affiliate, recently made the same decision. (Daily RFT contacted The Moth's national leadership by email; we'll update this post if we hear back.)

The St. Louis group is currently in a transition period, but will likely have a new name by the end of the week.

"We don't want to change what we're doing or restrict how many wonderful people go to our meetings," Wehe says. "I don't want it to be an exclusive thing, and I want to continue inviting anybody who wants to become a part of our community. We're still considering ourselves to be inspired by The Moth, but we're no longer an official affiliate group of them."

The decision is not without its benefits: Although the stories told at MothUp's meetings are digitally recorded, storytellers previously signed release forms giving rights to the videos to The Moth. But any new videos will belong to the new, locally based group -- and will be posted to its new YouTube site once a name is chosen.

"The volunteers are getting together and cracking open a bottle of wine and seeing what we can come up with," Wehe says. "We want whatever the new group is called to be wonderful and authentically St. Louis.

"The fact that The Moth was headquartered out of New York and we didn't own the stories was something that kind of bothered me. We want it to speak to the city."

The group's last event as MothUp St. Louis will be held June 30 from 8 to 10 p.m. at Foam, the same place it began. Stories are technically limited to ten minutes each, but Wehe says the group isn't strict about enforcing that rule. It's not clear whether the New York group would approve -- but Wehe, for her part, thinks the event will be "wonderful."