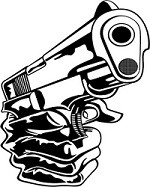 Police say a shootout that ran from Wellston to Saint Louis University Hospital sent one man to the hospital and a potential witness into hiding. According to the incident summary the victim, a 29-year-old black man, was parked on the lot of the Sav-A-Lot in the 3600 block of Page Boulevard when a dark-colored SUV pulled up nearby. The occupants then opened fire on the man, who fled in his car.

At that point, a second SUV, possibly a tan Mercury Mountaineer, joined the chase with its occupants also firing shots at the fleeing victim.

The pursuit continued south on Grand Boulevard, until the victim lost control of his car and crashed into the St. Louis University Research Center sign. His pursuers drove off, while the man ran to SLU Hospital and collapsed with a gunshot wound to the back of his head. He's in stable condition.

Police say the shooting victim had a female passenger in his car, but she fled the scene before officers arrived. The victim declined to give any further information about his passenger or the incident. Despite the obstacles of a disappearing witness and a tight-lipped victim, the investigation continues.