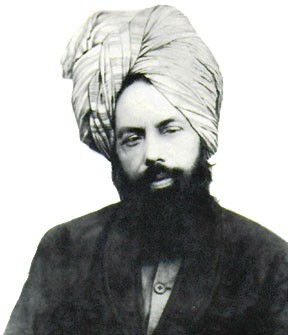 image via
Hadhrat Mirza Ghulam Ahmad: This Muslim (and all his followers) wants peace.

The Ahmadiyya Muslim Community will be out in the Delmar Loop tomorrow afternoon starting at 4:30 p.m. to distribute leaflets about their "Muslims for Peace" campaign. The leaflet will dispel myths about Islam, namely that all Muslims are terrorists embroiled in a holy war.

"We teach that there's no such thing as jihad of the sword," says Saima Sheikh, the group's communications specialist. "Jihad means 'inner struggle.'"

In the past, the Ahmadiyya Muslims have tended to stay out of public affairs. But, says Sheikh, "recently so much has been happening, and people have been asking us where the moderate Muslims are. We are that group."

The Ahmadiyya community was founded 121 years ago in Qadian, India. Religiously, the group is part of the Sunni sect, with one major difference: Members believe that their founder, Hadhrat Mirza Ghulam Ahmad, was the messiah. This belief has caused them to be persecuted by other Muslims; recently, two Ahmadiyya mosques in Lahore, Pakistan, were bombed and 100 people were killed.

"We're blessed that we live in this country where we have religious freedom," says Sheikh. "We are loyal citizens."

About 200 Ahmadiyya Muslims live in St. Louis. Sheikh estimates that between ten and fifteen will be on hand tomorrow to distribute brochures.