My Very Own Super Bowl Prediction

It's almost time for the big game, and I have to say, I'm pretty excited.
Myself, I'll be rooting for the Pittsburgh Steelers. I know, Kurt Warner and all that, but I actually happen to be a fan of the Steelers. No real reason, other than the fact that I always liked Bill Cowher, I like the Omar Epps impersonator that they have coaching now, and I like their uniforms. Yup, that's enough for me to like a team. Makes you think twice about actually putting any weight on the things I write, doesn't it? 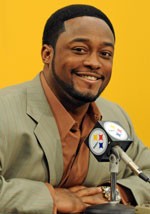 Now that I think of it, though, I do really like the new stadium out in Arizona, so I may have to take that into consideration... Boy, serious sporting analysis is tough work.
Here are the salient points of what I believe will happen in the game, all nice and bullet-pointy:

Warner completes more than 55 percent of his passes, but also gets picked twice.

Rothlisberger completes slightly less than 50 percent, but does not turn the ball over. Willie Parker gets 100 yards rushing, while the 'Zona running backs combine for right around 80 total.
The game will feature some of the best play by safeties you've ever seen on both sides of the field, as Troy Polamalu grabs one of the interceptions Warner throws, and the Cardinals' Adrian Wilson goes off for eight tackles and a sack.
Final Line: Pittsburgh 23, Arizona 13
Now, let's see just how badly this turns out, shall we?