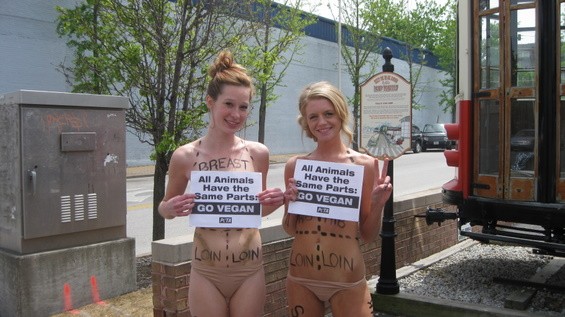 Diana Benanti
Two lovelies stumping for PETA in the Loop.

Nothing says animal rights like a couple of naked chicks standing on a street corner, right? Two St. Louis lovelies bared arms, legs and backsides for PETA in the Delmar Loop yesterday, hoping to educate passersby on the benefits of a vegan diet. The two women submitted their slender limbs to be marked like cuts of meat, demonstrating that all meat is murder.


Virginia Fort, an international campaigner for the pro-creature outfit, says that the demonstration is one of a few that she organizes: "We're here simply to raise awareness that we're all made of the same flesh, blood and bone. We all have the capacity to feel pain, and have fear of pain and whether its a cow, a pig, a chicken, a cat, a dog or a human. We're simply asking people to make the compassionate choice the next time they're at the dinner table."


One of the women, a student at Mizzou, says that working as a PETA activist has helped influence her peers' opinions about the health implications of a carnivorous diet. "We're socialized to believe it's normal and good and healthy to eat meat, but it isn't," says the woman, her slight figure a testament to her year and a half as a full-fledged vegan. She says that their tactic has shown itself to be effective: People seem willing to learn more about the vegan lifestyle. 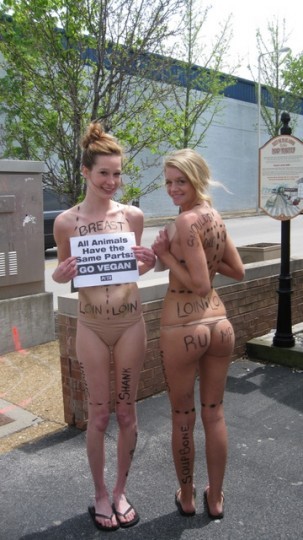 "We do demonstrations against all types of animal injustice, whether it be the meat industry, the dairy industry, animals used for entertainment, clothing, things like that," says Fort, who has been a vegan for four years.

Today, Fort will be in Indianapolis with these local spokesmodels, and then it's onto Milwaukee, where they'll exhibit their "meat tray" demo — naked women are covered in fake blood and made to lie in Saran-wrapped trays like so much ground chuck at the supermarket.

"I have more energy, I feel lighter. I've lost a little weight just from not eating meat," Fort says of her diet. "It's really never been easier; even in the four years I've been vegan I've been seeing an increase in vegan products on the market."

Bystanders are often "really receptive" to their pro-vegan message, she adds, though the response is probably less about health and more about the free pass to gawp at pretty young things. (Didn't our headline get your attention?)