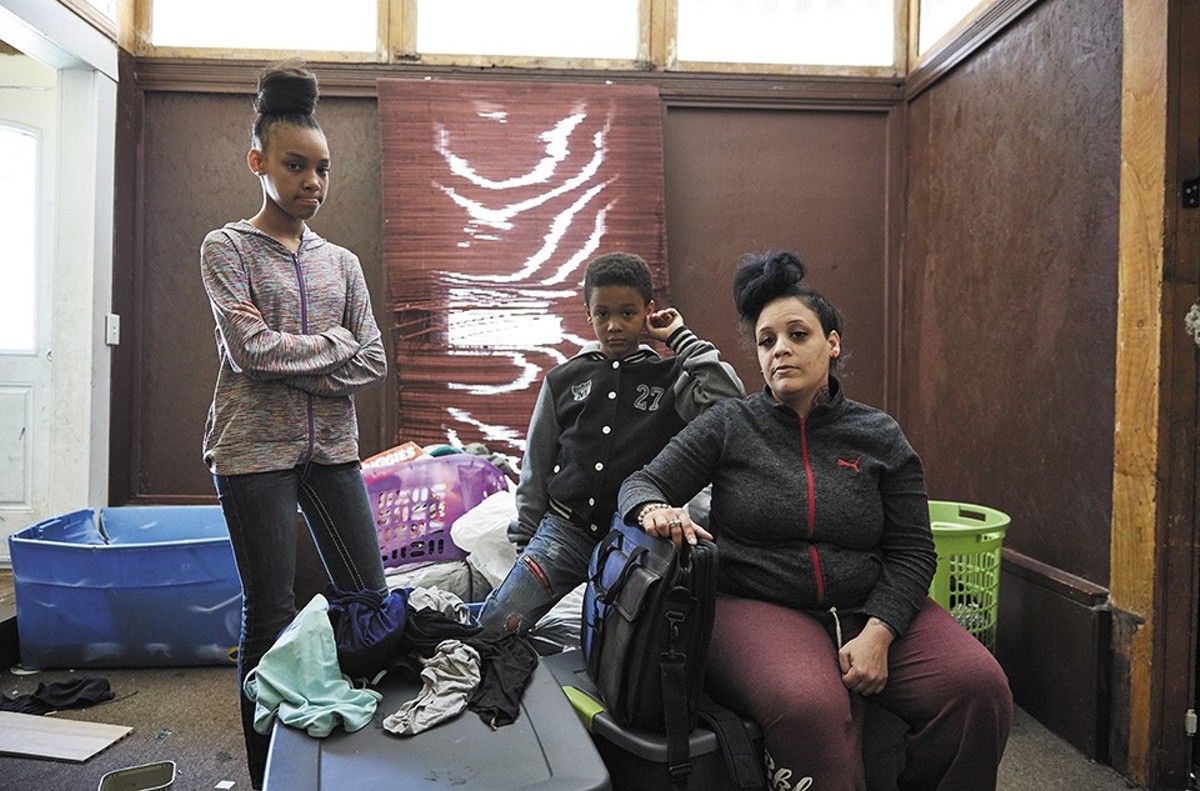 Terry Waller with two of her children in the Gravois Park home they rented for more than a year. THEO WELLING

For the last year, Nathan Cooper has been getting $1,450 a month to house Terry Waller's family in a home he owns near Gravois Park in south city. Most of that sum is paid by the federal government and taxpayers through the Housing Choice Voucher program. The program provides public funding for tenants in the private housing market.

Yet Waller has been living without a working kitchen or any exterior doors capable of locking securely. Although both are requirements of the program, Cooper, her landlord, has not attended to them — despite multiple requests.

Out of other options, she's called the St. Louis Housing Authority to run an additional inspection.

The inspector, whom Waller refers to as Mr. Roberts, arrives at her front door. (The housing authority declined to provide his full name without a signed request from Waller.) He also inspected the property before Waller moved in. Now he takes stock of the unit.

"Really, Nathan?" the inspector says, raising his voice, "What is this?" He gestures towards the back door, grabbing it with his other hand.

"It was one of the kids' fault, I guarantee it," Cooper responds.

"Listen," the inspector continues, "all I know is that it's unacceptable, and I need it fixed."

"Wait a minute! Listen to what I'm telling you," the inspector says. "You have a key, right? Then come in and fix it whether she's here or not — OK?"

The two go on, back and forth. Cooper isn't backing down. "Well, it was one of the kids. Look, I know what happened, they kicked it in and broke it."

"But Nathan, all that wood is dry rot. It wouldn't take a thing for the door to come right off," the inspector says, attempting to bring an end to the argument. "This door has got to be completely fixed today before nightfall — it's a totally unsafe situation."

The converted storefront at 3118 Chippewa was built in 1911, but all of its problems can't be excused by its age. The kitchen floor is uneven, made of particle board. The stove has not worked for weeks. Slabs of drywall partially line the hallway. The basement is unusable due to prior flooding. A broken refrigerator blocks use of the kitchen table.

The conversion fit two bedrooms downstairs. Five bedrooms are on the second floor — one of which is so small as to be debatable. When asked how many bedrooms it has, even Cooper is unsure. "Six or seven," he says.

As the RFT reported last year ("Do Not Pass Go," July 27, 2017), Cooper tends to purchase homes when they're cheap and makes minimal investments after that, just enough to pass the city and housing authority inspections. Records show one of his limited liability companies, Gateway Residences LLC, acquired this property in 2015 for just $7,500. Before that, records show, it was vacant and boarded. But with a bit of work, he was able to eventually move in a federally subsidized tenant and recoup his initial investment. Despite the large monthly sums he's collected for Waller's occupancy, the home retains a very low value on the city's tax rolls; records show that last year Cooper paid the city a mere $146.34 in property taxes on it.

"Are you writing all this down, Nathan?" the inspector asks after surveying the apartment. "OK, well then repeat back to me what you have to fix — start on the first floor and work your way up."

"The refrigerator, the back door," Cooper starts, "the ceiling tiles..."

"No, no, before you get upstairs — what else down here?" the inspector interrupts. Cooper doesn't reply. "Replace the stove. I want another one in here," he commands. "And the windows, you need to replace them. That's your responsibility."

"But it was shot from the inside, you can see that," Cooper says. "Are you sure someone in here doesn't have a BB gun?"

"No, it wasn't," the inspector responds. "I want the stove for tomorrow — and the refrigerator. Wait, let me ask you a question, Nathan: When you brought the new refrigerator, why didn't you take the old one out of the house? It's not fair for her to have two refrigerators sitting there in the kitchen.

"And no stove," the inspector begins again after a pause. "She can't cook anything healthy. The stove has to be replaced." 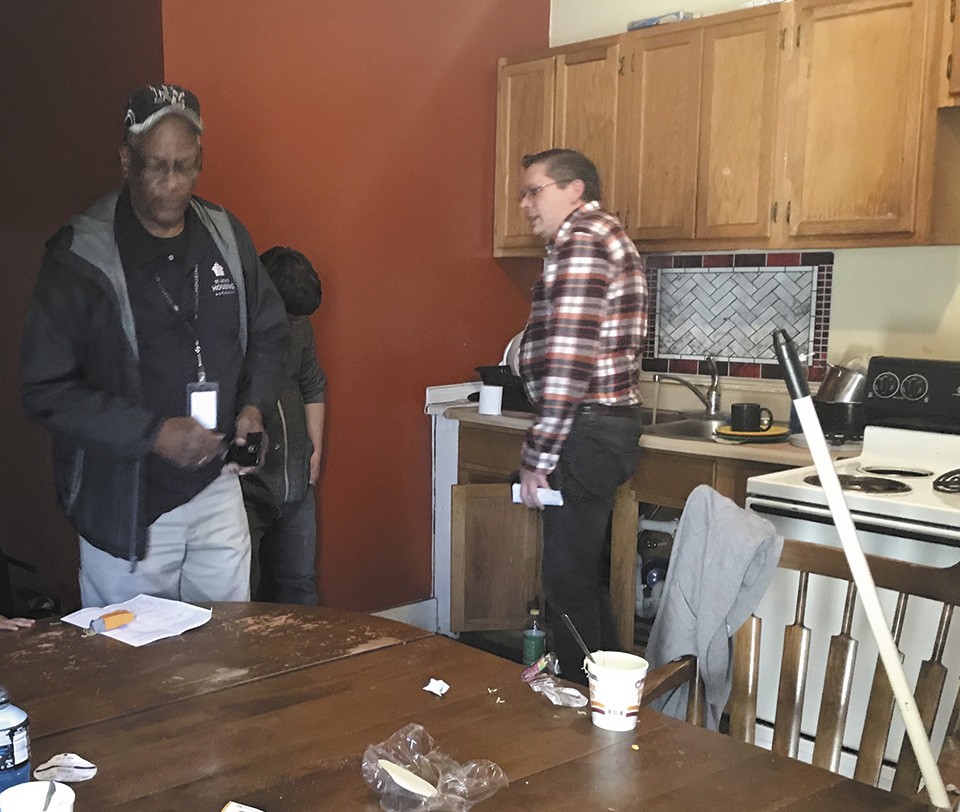 CAITLIN LEE
Nathan Cooper, right, tells an inspector he's not to blame for the home's condition.

As of the April inspection, Terry Waller and her nine children have lived for the last year at 3118 Chippewa Street — and she describes her time dealing with her landlord there as a "nightmare."

Waller and her children have roots on the south side — friends, family and a familiarity with the neighborhoods. At the same time, her block presents its challenges for raising children. Once, when Cooper was late to secure a window, she sent a text: "It's Chippewa, man, are you serious?"

Waller is a proud mother; she often shares stories about her kids. When Cooper assumes they are to blame for property damage, she quickly defends them. But Waller acknowledges that she and her children have had an impact on the home. "I can take responsibility for that," Waller says when the inspector points out a small hole in the drywall upstairs. She concedes the same about two bedroom doors she has taken off their hinges. In Cooper's absence, she's made some repairs to keep things together: fixing locks, boarding windows, sealing cracks for insulation.

For a moment between rooms, the inspector turns to Waller. "I do have one question to ask you now...why would you pick this house?"

"I have no idea," Waller says, frustrated.

"This is tenant choice," the inspector says, "and we tell all tenants before you move into a house, look at it thoroughly, and if it's not what you want, don't accept it. Also," he says, "don't listen to a landlord when he tells you he's going to fix something." Cooper, though he's within earshot, refrains from commenting.

Waller and the inspector walk through the hallway towards the living room. "This is just cheap carpeting he put down for when you came out."

"Of course it is," he responds, "but like I said, the problem is that you picked this."

The inspector asks how long Waller has been on the voucher program. "More than six years now," Waller says.

"Alright, so you know better — and you have to know better," the inspector says.

"I don't get it," Waller says later. "The Housing Authority spends all this money for people to live and then let him get away with this? For that price — a person should be comfortable."