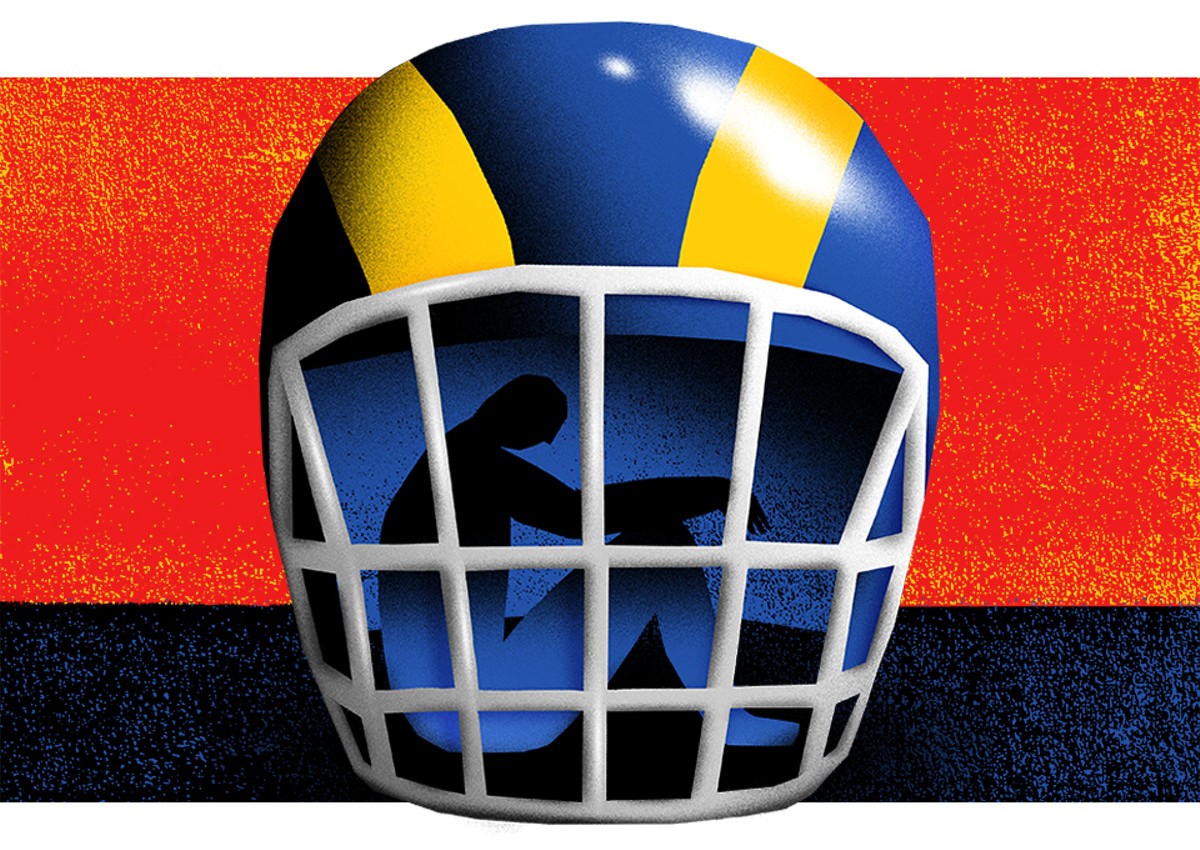 By the time Nathan Hobgood-Chittick was a middle school student in the mid-1980s in Orno, Maine, he was already skilled at making a persuasive argument.

"Mom, I would think you of all people would want me to play football," Hobgood-Chittick said one day.

Mary Hobgood recalls that she of all people was certain she did not want him to play football. At the time, she was a professor of religious studies at the University of Maine and taught social ethics. In that field, she discussed the fossil fuel, food and beverage, and corporate sports industries, which she thought were "based on making profit without limits, for relatively few investors, and nothing is barred on the way to making those profits."

Decades before there was a national conversation about a concussion crisis among players, Mary viewed the National Football League as an especially bad actor in American society.

Her son, however, appealed to her sense of social justice. Before the family moved to Maine, Hobgood-Chittick had attended a predominantly black magnet elementary school in Philadelphia while Hobgood was a graduate student at Temple University and her husband, Tom Chittick, served as a Lutheran minister at the University of Pennsylvania. Mary says Hobgood-Chittick, the oldest of her two boys, was "always attracted to the movers and shakers" and would come home from school crying because he wasn't black.

That's part of why he wanted to play football. Mary was adamant that he would not.

"There is no way you're going to play football," she recalls telling him. "It's a dangerous sport."

But Hobgood-Chittick sensed an opening in her defense; his mom was also concerned about inequality.

"Soccer is for white kids," he told her, but "football is for everybody."

And so the parents signed a permission form.

In one sense, it proved to be the right decision: Hobgood-Chittick had trouble reading, so "football meant even more to him, because he found success on the field in a way that he wasn't in the classroom," Mary says.

He became a hometown hero as a high school defensive end and tight end in Allentown, Pennsylvania, which led to a scholarship at the University of North Carolina. After college, he bounced around the NFL before finally landing a spot with the St. Louis Rams. Head Coach Dick Vermeil remembers Hobgood-Chittick as likely the hardest-working player on the 1999 Super Bowl championship team that became known as "the Greatest Show on Turf."

This season marks the twenty-year anniversary of that team, but the memories in St. Louis are tinged with anger and loss. In 2016, Rams owner Stan Kroenke moved the team back to its former home, Los Angeles, leaving behind an empty stadium and jilted fans.

Hobgood-Chittick later moved to Los Angeles as well, but he too is now gone. And so, at this twenty-year marker, it's worth contemplating whether Hobgood was right when she taught her college students the NFL was a league without limits.

She believed then, as she believes now, that football is a sport that "chews up healthy young men and spits them out."

Before the 1993 school year at UNC, Jeff Saturday was standing with other football recruits in a building near the stadium when he looked out the window and saw a young man in the parking lot who "was just broken down and crying."

"He's hugging and kissing his mom and dad and his brother repeatedly; he's kind of going back and forth," recalls Saturday, who didn't even like to hug. "And I'm like, 'This dude. I can't believe this.'"

It turned out that the emotional guy, Hobgood-Chittick, would be his college roommate for the next five years.

"It was comedy from the start," Saturday says.

Hobgood-Chittick was moving away from a supportive family and community. On offense and defense, he helped lead William Allen High School to the state football championship in 1992. At the grocery story, people would stop his mom and ask, "Are you the mother of the football player?" she recalls. "The football player."

"Nate's one of those special people that comes along very seldom in a coach's career," he says. "The thing that sticks out the most about Nate is he was always questioning 'Why?' because he always wanted to be better."

That could mean discussions about how they were training in the weight room or the coach's offensive and defensive philosophies.

Sniscak, whose father was also a coach on the team, describes Hobgood-Chittick as "an above-average athlete; he wasn't elite by any stretch of the imagination, but he was extremely dedicated to being better — whether it was in the weight room, learning technique, studying the playbook — whatever it took for Nate to get an edge, he was willing to make that sacrifice to do it."

At UNC, Saturday and Hobgood-Chittick battled every day at practice on the opposing offensive and defensive lines, only to go back to their room and spar in political and philosophical debates. Hobgood-Chittick leaned liberal; Saturday leaned conservative.

"It could start out in a real peaceful conversation and turn into a screaming match and then back to a peaceful conversation — let's hug out and we're going to go to bed, shut-it-down type thing," Saturday says. "It wasn't just words. He was a man of strong conviction, and I think that's why so many guys cared so much about him; he was real."

Hobgood-Chittick could also be the life of the college party. At one shindig hosted by members of the swim team, he put an empty Coors Light box on his head and started dancing to Michael Jackson.

Kelsey Durkin, a swimmer, saw this 305-pound man groovin' and thought, "Who is this guy?"

Together in her room, he spotted the "Serenity Prayer" (God, grant me the serenity to accept the things I cannot change, courage to change the things I can, and wisdom to know the difference) hanging on the wall. Hobgood-Chittick told her, "I live my life by that."

"That's a really weird way for a meathead to talk," Kelsey recalls thinking.

In a television interview years later, Hobgood-Chittick said of meeting Kelsey, "It was like seeing an angel."

When Hobgood-Chittick went home to Allentown, Mary Hobgood would make "pies and cakes, which I normally did not do, as treats" for her son.

Usually, she cooked healthy food. But at the meals during college breaks, she could tell that her 6-foot-3-inch son, who had been skinny in high school, was continuing to fill his plate even though he was full.

"I would see him force-feeding himself at our dining-room table, and I was horrified. And I said, 'Nathan, what are you doing?' And he said, 'Don't worry, Mom, I can lose the weight,'" Mary recalls.

Other players were on a similar diet, and Hobgood-Chittick needed to stay big in order to be competitive on the field. In 1994, when he was a freshman, the National Institute for Occupational Safety and Health released a study commissioned by the NFL Players Association looking at the rate and cause of death among former players. The researchers found that defensive linemen had a 42 percent higher risk of death from heart disease compared to men in the general population.

At UNC, Hobgood-Chittick had a bigger impact on the practice field than in games. During his freshman year, his roommate Saturday recalls, the team was running around campus when he caught a senior "not running the way we were supposed to, and he challenged him in front of the whole team, and they got in a fight ... because he was like, 'That's our integrity, that's our character.'" Afterward, the other player admitted that Hobgood-Chittick was right.

He earned respect from teammates for the "never skip a rep" attitude despite the fact that he played less than the stars around him. Disappointed that he wouldn't be starting his senior year, Hobgood-Chittick, who majored in communications and minored in African American studies, considered quitting but decided to stick with the sport.

"I stopped focusing on football and just focused on me being the best person I could be," Hobgood-Chittick told the Morning Call, a newspaper covering Allentown. "I want to be a good, respectful person; I want to be a good friend ... God has a place for me, and he is telling me to just worry about myself and things will take care of themselves."

During his senior year, a New York Giants coach scouted a pair of North Carolina star defensive linemen, Vonnie Holliday and Greg Ellis. But the coach also noticed Hobgood-Chittick, according to the Hartford Courant. Holliday and Ellis were drafted in the first round in 1998 and went on to successful NFL careers. Hobgood-Chittick did not get drafted but signed with the Giants. He was inactive for the first four weeks of the season, then cut and signed to the team's practice squad. Then the Indianapolis Colts signed him in November, but he did not play in a game for the remainder of the season.

Despite his own tenuous standing with the Colts — he had never played in an NFL game — Hobgood-Chittick wanted to help out his former roommate who had also not been drafted. So he visited the office of Bill Polian, the Colts president, who led the Buffalo Bills to three Super Bowls and won multiple NFL Executive of the Year awards.

"I had no footing at all with that franchise, so I stood outside Polian's door in my dirty sweats, saying a prayer," Hobgood-Chittick told Sports Illustrated. "I walked in and said, 'There's a guy selling electrical supplies in Raleigh right now who whipped all those first-round draft choices at North Carolina every day.' Polian looked at me and said, 'I love it. Let's get him in here for a workout.'"

Saturday went on to spend thirteen seasons in the league and made six Pro Bowls. His name is in the Colts Ring of Honor. Last year, he was nominated for the Pro Football Hall of Fame.

"There are not many people in the world who would go to bat for you like that — especially in the position he was in," Saturday says. "He was not in a position of leverage."

It did not work out as well for Hobgood-Chittick. The Colts released him before the 1999 season.