Back in July, one of St. Louis' largest amateur soccer leagues, La Liga Latino Americana de Futbol, was the subject of "League of Nations," an RFT feature story. 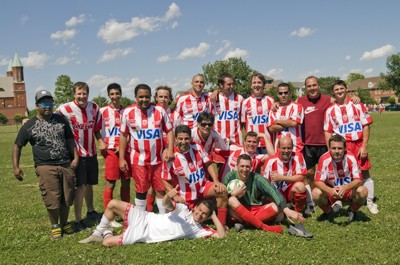 The winning team Necaxa, as photographed in July. Click photo for a high-resolution version.

The league has a rough-and-tumble style and features players from nearly corner of the map:

"Nearly two decades old, the league has grown from a weekend assemblage of 4 teams -- all hailing from the same small town in southwestern Mexico —--to 28 teams, with more than 1,000 players representing nearly every corner of the map: Nigeria, Kenya, Iraq, Brazil and Hungary among them. Virtually every country in Latin America fields at least one player, while two, El Salvador and Honduras, have their own teams."

Necaxa, which takes its name from a popular Mexican professional team, is one of the most diverse teams in the league. That diversity paid off in spades on Sunday, as both of the goals in the championship match were scored by two of the club's three Iraqi players. Necaxa's roster also features players from Mexico, Algeria, Poland and the United States.

This was the second championship for Necaxa in La Liga's seventeen-year history, the first coming in the inaugural season of 1991.

"We got a real tall trophy, I couldn’t even fit it in the truck," said Madera, a fifteen-year veteran of the league. "The atmosphere was great. You couldn’t even see the street from the field it was so crowded."

"They had an announcer and a DJ, so there were not one but two PA systems,” said Jesse Lippert, Necaxa’s goalkeeper. “[The league] really goes all-out for the final.”

To make the finals, Necaxa, had to defeat Zitro Star in the semi-finals (winners of first-place in the regular season standings), Cobras (the fourth place team) in the quarter finals, and Honduras (second overall during the season).