Need to Catch the MetroLink? There's an App For That! 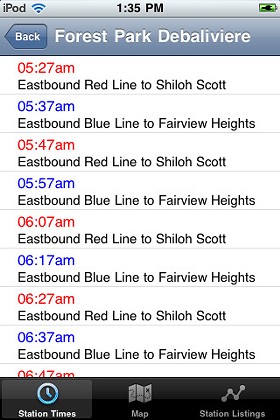 Metro STL had its genesis in a lunchtime conversation between Sproull and a friend about what a pain in the ass it is to access the train schedules on the MetroLink website. Sproull, who teaches Wash. U.'s popular iPhone app class, got busy coding.

The app has schedules for each MetroLink stop plus maps of the entire system so you can figure out which one is closes to you. It's currently available on iTunes for free for a limited time, after which Sproull will raise the price to 99 cents.

"This was the first useful app I created, so instead of looking at the financial aspect of the app or how popular it would be, I really looked for something that will benefit people," Sproull told Student Life, the Wash. U. student paper.

Sproull's previous contributions to the app universe were 25,000 Jokes, the games Leprechaun Hunter, Cupid Hunter and Santa Hunter (all are essentially the same, except for the variation in prey) and No Ma'am, which offers "non-scientifically tested yet Man-approved pre-canned responses to suite your needs to deal with women during those frustrating and irritating moments."

Though the schedules on MetroSTL are downloadable so the app is useful even in 3G-free zones, it doesn't update train schedules in real time. It also doesn't help with trip-planning or connections to the MetroBus system.

Student Life's app reviewer was unimpressed. "There should be an easy way to ask the app, 'I am located at X, and I want to get to Y by Z time--what time should I leave?' but there isn't....It's free, but that doesn't stop it from being annoying. Helpful, but annoying."