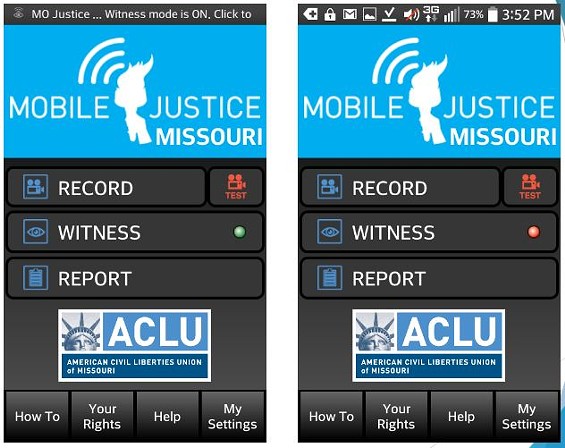 As the St. Louis region prepares for more protests following a grand-jury decision in the case of Ferguson police officer Darren Wilson, the ACLU of Missouri released a smartphone app to help demonstrators record and report interactions with law enforcement.

The ACLU Missouri Mobile Justice app lets users send an alert when they've been stopped by police so other app users can come to their location and document the interaction. Users can also send reports and videos directly to the ACLU of Missouri.

"It's the next best thing to having a civil-rights attorney on speed dial," says Justin Hansford, a Saint Louis University School of Law assistant professor. Hansford was arrested October 22 while serving as a legal observer at a Ferguson October protest at the Walmart in Maplewood.

The app -- available for Android now and for iPhones later -- has four main functions:

- The record setting lets users film exchanges with police that are sent automatically to the ACLU of Missouri. - The witness setting sends an alert to nearby app users when someone is stopped by police. - The report setting lets users send a detailed incident report to the ACLU of Missouri. - And the "Know Your Rights" page explains what rights Americans have when stopped by law enforcement.

"Since Michael Brown was fatally shot in August, we've seen a dramatic increase in the number of complaints from people who are routinely stopped, searched, humiliated and bullied into compliance by law enforcement officers," says Jeffrey Mittman, executive director of the ACLU of Missouri. "This app will empower Missourians who have traditionally felt powerless, regardless of whether they live in Ferguson, Springfield, Cape Girardeau or in rural Missouri."

Have an android and want the app? Get it here.