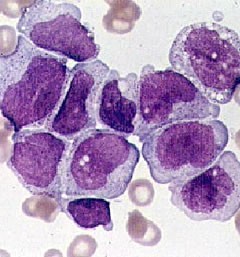 Leukemic cells, away from bone marrow, under the microscope.

You know why leukemia patients sometimes have to get bone marrow transplants? It's because the cancer cells are far more resistant to chemotherapy when they're embedded in the bone marrow. It would be so much easier to get the little buggers if you could somehow herd them into the bloodstream, where they're more vulnerable...

Now a group of researchers at Washington University Medical School has figured out a way to do just that, with the aid of a new drug called plerixafor. In a recent study, 46 patients suffering from acute myeloid leukemia (AML) received a treatment that combined plerixafor with standard chemotherapy. Nearly half of them achieved complete remission.

The standard rate of remission, says Dr. Geoffrey L. Uy, one of the doctors who worked on the study, is between 20 and 30 percent.

"If these results are repeated in a larger study, it would be transformative," said Dr. John DiPersio, the lead researcher.

Plerixafor was approved by the U.S. Food and Drug Administration in 2008 and was originally intended used by doctors to clear out healthy stem cells from bone marrow so they could be used for stem cell transplants in patients with multiple myeloma and non-Hodgkin's lymphoma, two other forms of blood cancer.

"We helped in plerixafor's development for stem cell mobilization," DiPersio said in a statement. "So we thought if it makes normal stem cells leave the bone marrow to circulate, maybe it would do the same with leukemic cells."

Cancerous cells are most vulnerable to chemotherapy when they're in the process of dividing. For leukemic cells, bone marrow is a safe environment, where they don't have to reproduce as quickly. They tend to lurk inside the marrow even after chemotherapy clears out the bloodstream and then cause the cancer to show up again.

But once the cancerous cells have been flushed out of the marrow and into the bloodstream, they're not as protected and have to reproduce in order to insure their survival. That's when the chemo zaps them.

DiPersio points out that differences in patients' DNA make cancer notoriously tricky to treat. The plerixafor treatment, however, seems to work on everybody, regardless of genetic makeup, mainly because the drug doesn't target the cells themselves. "Instead we are targeting a common pathway that all leukemic cells are addicted to - in this case, the relatively normal environment of the bone marrow," he said.

The study has been published in the journal Blood.

In the next phase of research, DiPersio hopes to repeat the results in a larger study. He also notes that plerixafor targets just one of the means by which leukemic cells are tethered to bone marrow and that he plans to experiment with other drugs and pathways.