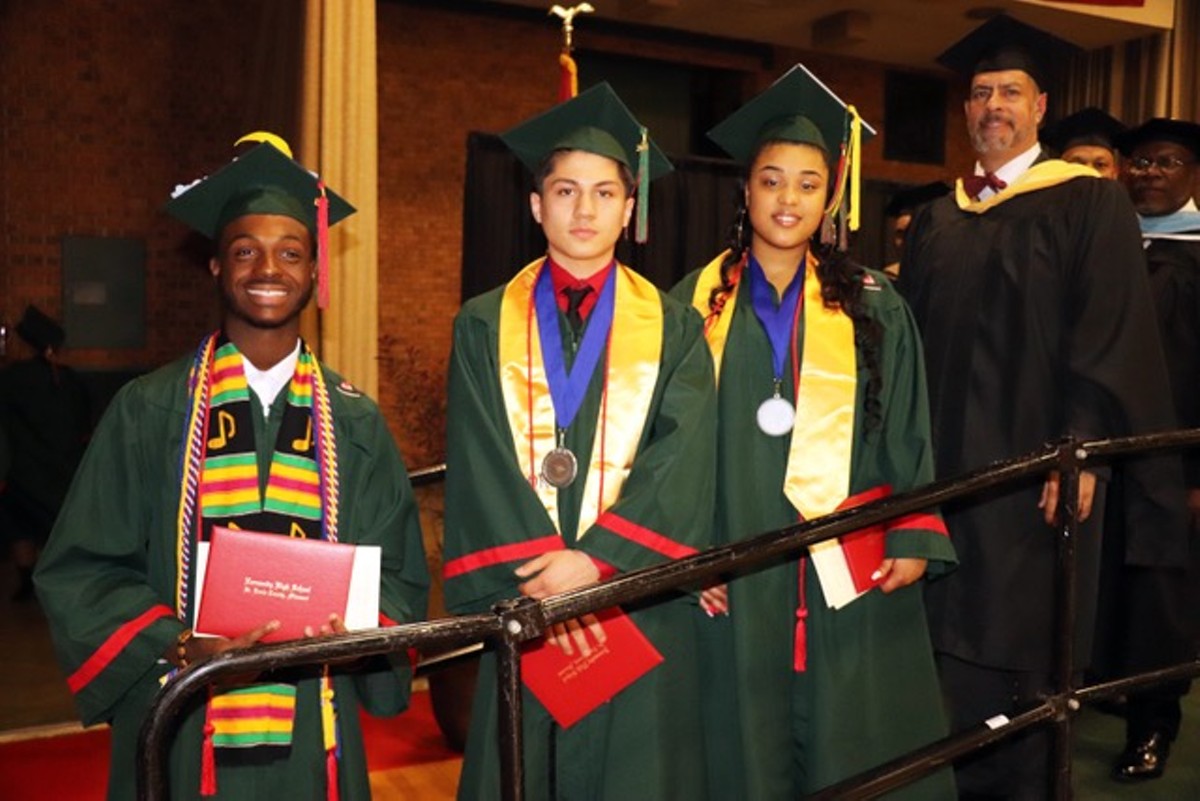 Graduation season is upon us, caps and tassels joyously flung through the spring air by proud students against a backdrop of beaming parents, friends, relatives and educators drinking it all in.

These are the good days in education. When you attend a commencement or awards ceremony — I just came from one, happily — it's a fine respite from the consternation writ large over the horror stories and the runaway spending and the hopelessness that supposedly characterize our educational system.

Now, we all know that schools are not created equal. The disparities in public education are legendary, especially in the St. Louis area, where the richest of the rich live in districts miles away, literally and figuratively, from the city's poor.

But let's put that aside and look at a couple of success stories from the class of 2019, stories of kids lucky enough to attend public schools that actually cared about them, schools that they cared about in return.

Maybe the cynics will say that they represent the privileged few, that I'm cherry-picking a couple of success stories from the relatively small slice of public districts where opportunity abounds in St. Louis. Maybe I am. So be it.

Meet Kayvion Calvert, one of the privileged few. Thanks to his own initiative — and to the fact that he went to a high school that cared about him and afforded him the chance to make the most of his abilities — Kayvion is off to Alabama A&M University to major in political science and minor in secondary education, with a résumé that's almost ridiculously impressive.

He was class president as a senior, serving all four years in student government. He was also a four-year member of the school choir, a passion he pursued while singing in both the choir at his church and another one in the community, as well as acting in drama club productions.

Kayvion also took part in Washington University's College Prep Program and Wyman's Teen Leadership Program, in addition to his work volunteering for a not-for-profit known as the Village, which helps mentor young African American men. It's no surprise he was a finalist for the Boys & Girls Clubs' "Youth of the Year" award.

Obviously, Kayvion Calvert is not your average kid. And, admittedly, maybe it helped that he didn't come from just any public school district.

Then there's Gabrielle Brown, Kayvion's classmate. She was class valedictorian, with a GPA of 3.96. But, in fairness, she too was a bit privileged: Not only did her high school launch her to a college scholarship in computer science at the University of Missouri-St. Louis, but it provided an opportunity to supplement her high school studies in an associate degree program at St. Louis Community College-Florissant Valley.

So, in addition to graduating as class valedictorian, Gabrielle is already a member of the Phi Theta Kappa college honor society, which honors students at two-year colleges. She was also a member of the high school band. And she had an internship at Centene.

You could forgive Gabrielle if she were a little boastful about all this. But she's not, deflecting credit to the fact that she was one of the fortunate ones who attended a high school that, in an email, she termed "a critical factor" in her success.

"At my school, you establish so many connections and develop so many relationships, you meet people from so many diverse backgrounds it's honestly astonishing," she wrote. "The people you meet don't just fade out of your life, either. They are present and encourage you [to] continue on your road of success.

"When I was little, going to my elementary school as a child, they had programs to help children succeed. Whether the child was advanced or a little behind, they are capable of supporting children on a more personal level and really connect with them. They influenced me to become the person I am today, and I intend to continue giving back."

No, they graduated from Normandy. Yes, the same Normandy Schools Collaborative often presented as the symbol of all that's wrong with public education in St. Louis and the nation.

I'll confess I chose the word "privileged" with irony. I do not cite the wonderful, real-life stories of Kayvion and Gabrielle to suggest, in any way, that all is well with the Normandy Schools Collaborative. It's not. The test scores are still near the bottom of the heap. So are the challenges facing the district.

The numbers illustrating the mountain of a challenge faced by Superintendent Charles Pearson and the district haven't changed. The district serves a particularly poor swath of north county including Pagedale and Wellston. Ninety-seven percent of its students are black, and a stunning 92 percent of the 3,100 kids residing in the district's 23 municipalities are poor enough to qualify for free and reduced student lunches. The median household income in the district is $30,100, and the median home value is $69,700.

Perhaps even more daunting, according to Dr. Pearson, the district has a 40 percent "mobility rate." That means, unlike your Claytons and Ladues, nearly half of the kids in the district are either homeless or moving between homes in the school year.

Many people look at these numbers, and the district's test scores, and proclaim the situation hopeless. But I had a chance last winter to visit with Dr. Pearson and his team, and to see some classrooms, and what I saw didn't look like those numbers.

Instead, I met teachers and administrators with no false pretenses about what they were facing, but absolutely no trace of self-pity. What I saw instead was pride, from Dr. Pearson to the staff to the teachers. Pride in how they were getting ready a new preschool that would create a more seamless transition from early learning to kindergarten. The goal: for kids at Normandy to perform at or above grade level in reading, math, science and social studies by the time they finish third grade.

And they're excited that Normandy will become the first district in St. Louis to adopt a model called EleMiddle, in which kids from grades one through eight are together, in place of the traditional middle school approach, which can be especially fraught in poorer districts. Dr. Pearson sees it as a path to improvement both in academic and behavioral terms.

I left Normandy with one basic takeaway: These people are really trying to help these kids. And the kids — the ones I saw — are just cute kids like anyone else's. They're not numbers. While the customary measures and accountability certainly matter, I wish everyone could visit Normandy and see how human this story is, and see how hard people are working to achieve success stories.

Graduation day at a more fortunate school reminded me of my visit to Normandy. From afar, maybe it's easy to brand Normandy a "failing" school district.

But don't try telling that to Kayvion Calvert or Gabrielle Brown.