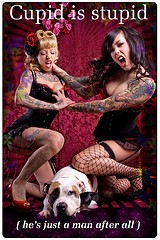 flickr.com/photos/syl2007
Unreal has just been informed that the biggest question that plagues single women is "Why are all the good men taken?"

This came as a surprise to us, because we always believed the lament of the single woman (well, actually, women in general) was "Why are men such assholes?"

But we came across the good men being taken question in an article in the Journal of Experimental Social Psychology, which told us right away that this was a question of serious scientific import. Or maybe the asshole question is far too complex to be resolved with one experiment on a group of undergrads who need the credit for their Intro to Psych course. (Remember when you actually got money for participating in a psych experiment? Unreal does -- with longing.)

Ph.D. student Jessica Parker and her advisor Dr. Melissa Burkley, the authors of this article (called "Who's chasing whom? The impact of gender and relationship status on mate poaching"), hypothesized that "taken men are perceived as good" and set up an experiment on 184 undergraduates, 97 of them female, at Oklahoma State University to prove it. 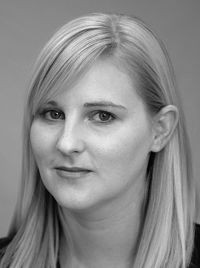 Synergy Group
Dr. Melissa Burkley
"It was a web experiment," Burkley tells Unreal. "We set it up as a questionnaire, like on eHarmony or Match.com. They logged in and answered questions about their likes and dislikes. We told them we found a match in our database and sent them pictures of attractive members of the opposite sex - always attractive. Then we asked a series of questions about whether they would initiate contact with this person or flirt, all the way up to actively pursue. The only difference is, we told one group that their match was in a relationship." 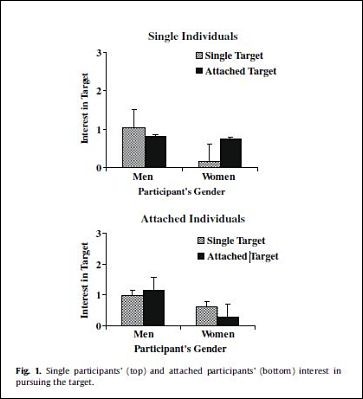 Journal of Experimental Social Psychology
The data that proves single women are poachers, though it appears single men want to poach just as much.
Unreal was, frankly, disturbed. In the past, we have noticed an exclusion of single women from couple-y dinner parties while single men were welcomed, but we attributed that to the assholish qualities of the hostess, not actual scientific fact.

Burkley started dating her husband in high school and has no personal experience with poaching or being poached. And since her study was done on the sly - under the assumption that women would be less likely to actually confess to wanting to poach someone else's boyfriend or husband - she doesn't have any real explanations for her findings.

She does, however, have theories.