Remember the pet monkey that bit a six-year-old boy at the Godfrey Bark in the Park dog festival in June? The black-and-white female Java macaque monkey named Nina has apparently been involved in quite a complex and bizarre custody battle that sent her from Madison County to Indiana to the Saint Louis Zoo -- and now off to a rescue center in Kentucky.

It is there the monkey will remain, says Madison County State's Attorney Tom Gibbons, who yesterday filed misdemeanor charges against Kendra Hougland, the Alton, Illinois, woman who owned Nina.

"This was a difficult situation," Gibbons says in a statement. "Nina is now in a place that is much better equipped to take care of her and her needs as a wild animal. I hope this case serves as a lesson to anyone who considers having a wild animal as a pet in their home."

After Nina bit the boy months ago, Madison County animal control officials took possession of the monkey and allowed a local woman to keep the animal at her residence since local facilities were reportedly not set up to house the primate during the required quarantine period, prosecutors say.

Anastasia Folorunso for RFT
File photo of Bark in the Park event in St. Louis.

For reasons that are not totally clear, this woman -- without the knowledge of local law-enforcement officials -- transported Nina to Indiana, "forcing State's Attorney Gibbons to file a Declaration of the Right of Possession with the court in order to regain possession of the primate and turn it over to the St. Louis Zoo."

The zoo then took Nina on July 3 -- and subsequently transported her to a rescue center in Kentucky, where prosecutors say she will stay.

Meanwhile, police determined that Hougland was breaking the law with her pet:

During the course of the investigation, it was determined that Hougland, an Alton resident, who had been in possession of Nina since August 30, 2012, did not lawfully own her and was in violation of the "Dangerous Animal Act" which makes it a criminal offense to possess a primate.

She was charged yesterday with three counts of unlawful possession of a primate, a misdemeanor, and was given a notice to appear. Penalties range from fines and probation up to 30 days in jail, according to Gibbons, who plans to also seek restitution for medical costs for the victim's family as well as the costs incurred in caring for Nina.

Hougland previously told reporters during a custody battle: "Nina was like a daughter to me.... If they put her in with other monkeys, they'll hurt her."

Here's a larger version of that photo of Nina: 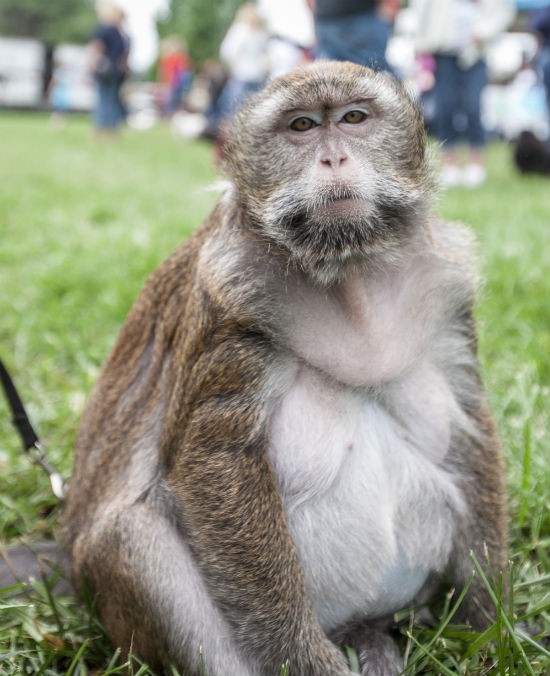