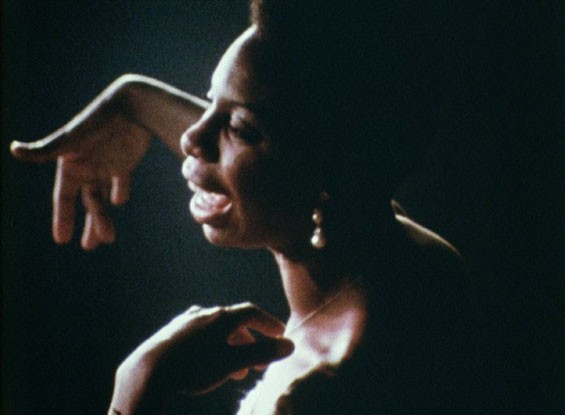 Courtesy of the Sundance Institute
The jazz great Nina Simone.

The musical career of jazz singer and pianist Nina Simone was -- like much of her life -- filled with contradictions. She rose to fame rather quickly -- she was 25 when her recording career took off -- but only began playing in clubs in order to finance her classical training. She was a revered figure in the 1960s, nearly as well known for her activism as for her music, but by the beginning of the 1970s she had disappeared from public life.

She lost most of her money and became an exile, living in Barbados and Liberia to avoid arrest for tax evasion. Though she continued to perform occasionally -- she enjoyed a brief comeback in 1987 when her 1958 hit "My Baby Just Cares for Me" was used in a TV commercial -- she retained a low profile until her death in 2003. The title of Liz Garbus' documentary, What Happened, Miss Simone? (taken from a 1970 magazine profile written by Maya Angelou), isn't merely rhetorical. This is a question that many of Simone's fans had been asking for decades.

Garbus' film, the first of at least three competing Simone film projects to be released, is a straightforward compilation of interviews, archival footage and musical performances. That in itself is hardly a surprise, although it is refreshing, given the number of recent documentaries which resort to animated sequences, re-enactments and other gimmicks.

Perhaps less expected is how close the film gets to the emotional pain in Simone's life and how open it is to the flaws and contradictions of her personality.

Through diary entries, the film depicts a very different Simone than the public knew 50 years ago. Garbus shows the singer's deep depression, her violent rages and her resentment at being forced through a grueling schedule by her abusive husband, Andrew Stroud, who also happened to be her manager. (Their daughter Lisa Simone Kelly is the executive producer of What Happened, and while some have criticized the film's use of interview footage of her father, his perspective -- as well as Kelly's own account of her often strained relationship with her mother -- add considerable depth to the film's portrait of Simone.)

There are so many conflicting and intermingled strands in Simone's life that it's remarkable that Garbus' film can follow anything close to a narrative, yet she manages to fit it into 105 minutes without trivializing Simone or reducing the events to sound bites and old TV footage. The singer's intense involvement with the civil-rights movement and increasing interest in black identity are presented in detail, and the film shows both how they affected the artist's life and transformed her music. What Happened illustrates the political and cultural era in which Simon emerged, how it turned her into a voice of black rage and protest, and also shaped her into a fine interpreter of the changing musical scene. (How many other jazz musicians were then covering songs by Dylan and the Bee Gees?) But the film also reveals the pain and anger created by her mental illness, a bipolar disorder which was undiagnosed for more than half of her life.

Knotted into all of these things is Simone's odd ambivalence to her musical career, a frequently casual indifference (and occasional outright hostility) which makes her music unconventional, vibrant and even a bit threatening. Having never reached her goal of becoming a classical pianist, Simone often belittled the more commercial musical path she had chosen, and that detachment can be heard in her records, her voice straining to expose the bitter, romantic dreams of the lyrics while her fingers effortlessly travel along their own path, surreptitiously slipping tricky baroque-styled figures into the jazz rhythms.

And perhaps most revelatory are the many scenes of Simone in performance, sometimes carried away by the music, at other times treating the stage as a battlefield with the audience as an enemy to be challenged. The film is book-ended by two performances, both from the Montreaux Jazz Festival, which show the extremes of her musical personality. In the first, from the 1970s when she hadn't performed widely for a few years, Simone walks out on stage, strikes an awkward curtsy and then freezes, glaring at the audience for several seconds before finally taking her seat at the piano. Suddenly she flashes a wide grin, as if deliberately adopting a new face, and tells the audience that she has decided to stop playing jazz festivals.

The second, the film's last and arguably most stunning performance, comes from 1987. Again Simone, now older and showing signs of medication, addresses the audience, this time to reveal her acceptance of them and her acknowledgment of her long career. She starts to play, returning to her early hit "My Baby Just Cares For Me," but while her vocals remain close to her original interpretation, the crisp chords and infectious bass shuffle of the 1958 recording are replaced by an elaborate Bach-inspired fugue that races along yet astonishingly holds its own against the original jazz tempo. This isn't just an artist offering resistance to the audience's expectation; it's an artist leaping unafraid into her abilities, following the path of an inner musical voice.