No Beating Around the Bush: Georgia Scott's New Book, Down There, Is About Exactly What You Think It's About 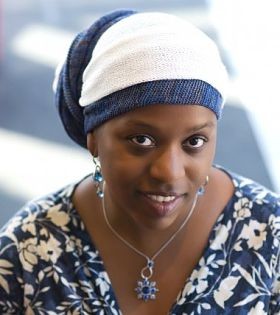 Georgia Scott has been a visual journalist for The New York Times, run a bookstore/cafe in Harlem, traveled to 57 countries, published an international study of headwraps and has now produced a book which may have one of the most provocative titles we've seen in some time: Down There: Narratives About the Joy, Aroma & Overall Existence of the Bush. And, no, that's not metaphorical.

This weekend, the St. Ann native will return home to give a trio of readings at MoKaBe's Coffeehouse (Saturday, February 4, 7 p.m.), Rue Lafayette Café (Sunday, February 5, 2 p.m.) and Subterranean Books (Thursday, February 9, 7 p.m.) to get St. Louisans in the mood for V-Day. A few weeks ago, she talked to Daily RFT by phone from New York about books and bushes.

Daily RFT: What inspired you to put this book together?

Georgia Scott: I was at a Thanksgiving dinner party with friends from a lot of different cultures and the subject of sex came up in a way it never would have if we were all back home with our friends. People really opened up. At the time, I owned a coffeehouse and bookstore [Globetrippin International Coffeehouse and Bookstore]. It was a really intimate place. I started asking people, what do you do down there? What's your bush like? It took off. There were so many things I didn't know.

Did anything particularly surprise you?

It's hard to say anything to surprise me. I go to swingers clubs in Paris -- I'm working on a novel.

[Laughs.] People look at the book and laugh out loud. That's the biggest joy. It's been constructive. Whatever experience you've had on your own, you're not alone anymore. A few people wanted it to be more shocking. They were disappointed it wasn't a more salacious, pornographic read. It's not supposed to do anything for you. It's a great bathroom read. You can get through it easily. There's no psychological analysis or backstory or anything about what happened next. It's just page after page of voices. I felt very proud of how it touched people. Even my mom -- she won't even talk about her hot flashes, but after she read it, she said, "Baby, I learned so much!"

What are some of your favorite stories?

My favorite parts are men and women talking about their own hygiene in chapter one. [Laughs.] Like, "I don't get it, my friend douches all the time and it still stinks." There's someone remembering when Bath and Body Works came to Atlanta. It gets really hot there. He said everyone smelled like cucumber and pear, except you could tell the time of the month because the whole mall would smell like rancid fruit salad.

There were a lot of stories about how sex was good or bad after they got shaved or trimmed. There was a black woman who said she'd never shaved, but when she was with a white boy -- probably for him -- she shaved it off altogether. The next time they had sex, she said it was amazing. But there was another woman who had a complete Brazilian before she got married. They were going off to the islands for the honeymoon. She said it was the worst sex she ever had, just friction, scratching on her. That's something no one thinks about. And there was a guy who was getting ready to go down on a woman. She stank, so he sprayed perfume on her. Perfume's mostly alcohol, so it all shriveled up and looked bruised.

[Crosses legs.] What are you working on now?

I'm about to travel around the world, first to see the European bush. I've got signings lined up in Paris and other cities in Europe. It's funny how Americans are prudish but invasive when talking about sex, and the French are open about sex but don't ever talk about it. I'm finishing a cookbook of recipes from the café. And I'm still writing about bush on my blog, The Public/Pubic. It's stories, but they all boil down to something dealing with the pubic. It's been fun.