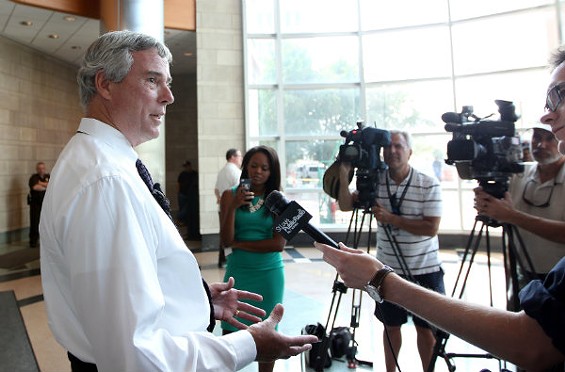 A grand jury has been considering evidence for three weeks now in the case of Ferguson police officer Darren Wilson, and the hearings will likely continue for at least another month despite the official term for the jury ending tomorrow.

"The process won't be concluded until next month at the earliest," says Magee.

"There are twelve of them, so the meetings will probably be held at different dates and times to accommodate their schedules," says Magee.

Yesterday the Washington Post reported that unlike most criminal cases, prosecutors are not telling the grand jury what charges they think Wilson should face. Instead, the prosecutor's office is presenting evidence to the jurists as it receives it, allowing the grand jury to consider all the photos, videos, testimonies, ballistics and other details involved in the investigation. Such a process greatly adds to the time the grand jury convenes but is also viewed as a more transparent way of presenting evidence in high-profile crimes. After the hearings conclude, the grand jury will help determine what charges to bring against Wilson -- if any.

Magee tells Daily RFT that the only grand jury in recent history to convene as long as the Wilson case was in 2000 when two undercover officers shot and killed two suspects in a drug sting at a north county Jack in the Box. In that case, which carried many of the same racial overtones and public outcry as the Michael Brown shooting, the grand jury declined to indict the officers. Email the author at [email protected].