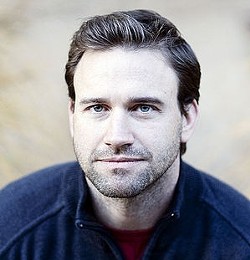 Photo: Jen Silverberg
Tom Kavanaugh's "No Sweat" will trace five articles of clothing to the factory where they were made.

Tom Kavanaugh realizes his documentary on sweatshops in the clothing industry won't be an easy one to make. For starters, the companies he plans to profile -- Walmart and Nike, to name a few -- aren't likely to cooperate. Then there are the language barriers and other logistical challenges of shooting a documentary that will largely take place in Southeast Asia and Central America.

But the biggest hurdle, for the moment, is financial. The 35-year-old SLU grad estimates the movie will cost at least $150,000 to make. So last week the budding filmmaker turned to Kickstarter to help raise part of those funds.

Kavanaugh is hoping the crowd-funding site will bring in $95,000 for the project. It's an all or nothing proposition. If he meets the funding goal by March 11, he walks away with all the money. If not, he gets nothing.

"It's an ambitious goal, I admit it," says Kavanaugh. "But that funding amount should be enough for us to shoot the film. I hope to get grant funding to cover remaining costs."

Kavanaugh, a personal trainer (and a former Jeopardy! champion who was featured last year in the RFT article "Megaminds"), caught his first glimpse of a sweatshop when visiting Bangladesh in 2005.

"By Bangladeshi standards, the conditions were good, but it was nothing that any of us would want to work in," says Kavanaugh.

His interest in sweatshops returned with him to the states. A couple years later, he filmed the following trailer by asking St. Louisans their thoughts on their own clothing and shopping habits.

"I can't say I was surprised by people's reactions. Sweatshops are not one of those high-profile causes anymore," says Kavanaugh. "I think people were concerned at one point, but it has faded away a bit."

He says the objective of his film is "not to make a depressing guilt trip" but rather an entertaining movie that will -- hopefully -- renew interest in the topic. Kavanaugh plans to trace five articles of clothing from the U.S. retailer where they were purchased to the factory where they were manufactured.

For more information on the project -- and a chance to get your name listed as a producer of the film -- visit the Kickstarter page for No Sweat: The story of the people who make our clothes.