No, There Wasn't a Bald Man Stabbing Strangers in Metro East, Police Say 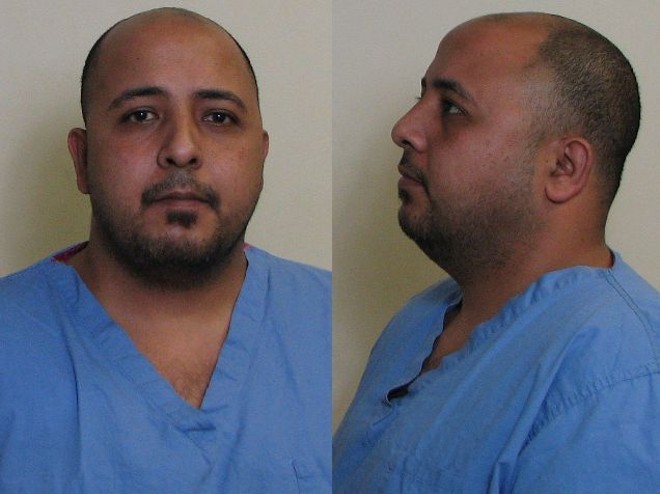 PHOTO COURTESY OF HIGHLAND POLICE DEPARTMENT
Mahmoud Massoud made up a story about being attacked, police say.
A Metro East man's terrifying story of a knife-wielding stranger was compelling enough to bring a swarm of police to his neighborhood — but it was a lie, authorities say.

Mahmoud Massoud, 34, of the Illinois municipality of Highland, called 911 around 10 a.m. on Tuesday to report he had been attacked at home by a bald white man, police say. He claimed he fired two shots at his assailant before running outside to safety.

Neighbors, who had heard the shots, also called 911. When officers arrived they found Massoud bleeding from cuts on his shoulder and chest. Massoud warned that the man might still be inside, possibly with Massoud's gun, authorities say. So Highland police surrounded the home.

But there was never anyone else inside, and the story of an attacker was a hoax, police say. Neighbors who had been outside the entire time told officers they had seen no one leave the house after Massoud.

Police had called in the region's SWAT team, whose members evacuated the nearby homes. They entered Massoud's place about 1 p.m. and confirmed no one was there. An Illinois State Police crime scene squad followed up to process the scene. Investigators found no people, but they did find three guns — a shotgun, rifle and handgun.

Massoud, who had been treated at a hospital and released, was driven to the police station to explain. He was adamant: A bald white guy with a knife cut him.

"He wouldn't come off his story, but there was absolutely no evidence of anyone else inside the residence," Highland police Lt. Christopher Conrad tells the Riverfront Times.

Conrad says the episode was "kind of odd," but he's happy to have it resolved.

"Fortunately," he says, "no one is worried about any roaming, bald knife attackers."