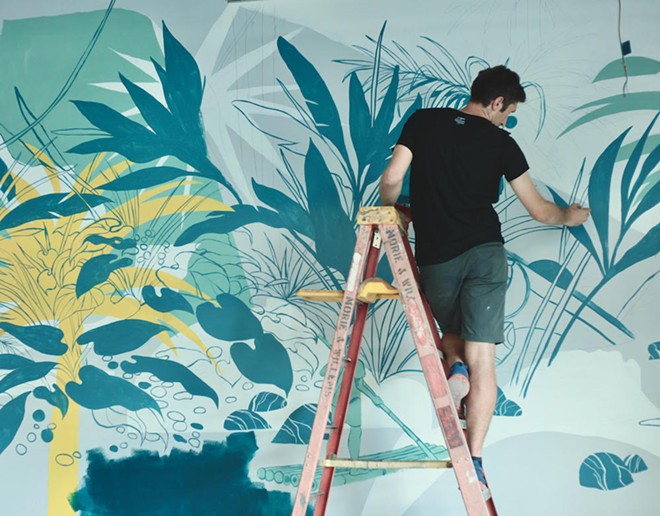 Noah MacMillan, a frequent contributor to the Riverfront Times and graduate of Washington University, died on July 31. He was 33 years old.

His family shared news of the death on social media on August 1.

His wife, Hitomi Inoue, shared the same message on Instagram and Twitter: "Noah died peacefully in his childhood home around noon on Sunday. He was the most beautiful human being, kind, generous, and loving to all who knew him. He was a dedicated illustrator, majestic athlete, killer chef, and an ardent Arsenal fan. He was a gentle giant who could also throw down on the dance floor. You know he also would have been a great dad.

"If you had the privilege of being with him, please keep telling your stories about him. I want to hear them all. Please cherish all the Noah art you have in your home. Sending love to all, in the great example that Noah set for us. I’m so grateful to have so many beautiful years with Noah. My heart breaks and fills with gratitude."

Evan Sult, art director for the Riverfront Times, shared his memories of MacMillan in a Facebook post:

"I'm so surprised and sad to hear of the passing of Noah MacMillan. Though our relationship was primarily professional, we came up together in our fields, and I've always considered him not just a friend but a stand-up human being." 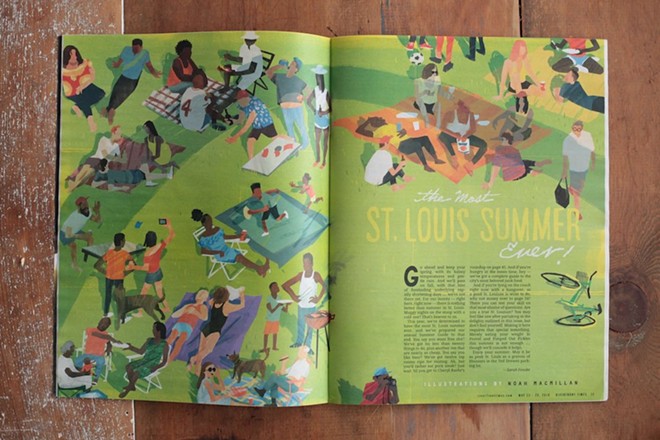 Sult and MacMillan first crossed paths when Sult was editor of the now-defunct Eleven magazine. He remembers seeing something special in MacMillan's early drawings.

"When I started as art director at the Riverfront Times, he was the very first illustrator I went to for our big Summer Issue, because I knew he was going to nail it. And he totally did, turning in a giant two-page piece that was pure summer turned all the way up, with the unseen Arch casting its curving shadow over everyone. It was a brilliant solution." 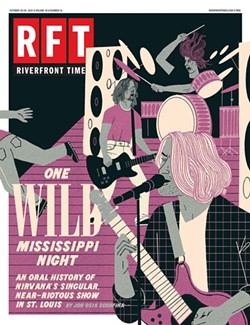 NOAH MACMILLAN
MacMillan shared how fun doing this Nirvana cover was on his Instagram.
John Hendrix, professor and chair of the MFA program in illustration and visual culture at Washington University, remembers MacMillan as a student at Wash U. "After teaching 18 years, there are always a handful of students who you will never forget. Noah MacMillan was one of those. ... He was searching for something, for a voice that was his own from the earliest moments I had him in class. I honestly think I didn't teach him very much, he had it all inside when I met him. His voice simply had to find a home," Hendrix says.

Hendrix, an award-winning illustrator himself, remembers watching MacMillan struggle with a project. He was trying to create a triptych of images that retold an Aesop's fable. Despite creating three versions of the project, MacMillan was disappointed in all of them.

"I was elated for him," Hendrix recalls. "He was so hungry to find that thing inside of him, and it wasn't coming out. (We've all been there!) As a teacher, some of the most enjoyable moments are when you see something that the student themselves do not. So, you try to encourage them to, once again, go back down into the mine and dig up another bucket of coal, looking for that diamond. Noah was never afraid of digging, over and over, until he found the gem in the middle of the muck."

After graduating from Wash U in 2011, MacMillan was part of the "Brain Drain" collective in St. Louis, an initiative started by Wash U grads to retain talent in the metro region.

"They succeeded in collecting vibrance and fun in town and Noah was a large part of that," says longtime MacMillan friend Ben Kiel. "He made friends easily and was a genuine connector in town."

Kiel also remembers MacMillan as being extremely serious about his work, and Hendrix concurs.

"When I worked at the New York Times as an art director for three years, we had a phrase we used in the art department as the highest compliment for an illustrator," Hendrix recalls. "Simply, we said, 'They're a pro.' They could give you amazing sketches, make edits, solve the visual problem and deliver an amazing drawing on time: A pro. Noah had a rare and sophisticated visual language that cut across both design and images. I personally was in awe of his ability to draw, use color and think graphically about edge and shape so seamlessly. Noah should have had a lifetime to continue making his amazing work... he had so much left. I heard from his family that he was on deadline when he died. Noah was a pro.

"The illustration world, and all of us who knew him, are diminished with him gone."