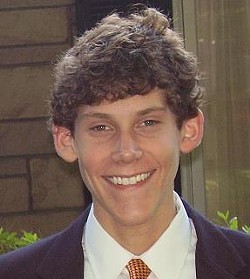 At the tender age of 18, the St. Louis native and University of Missouri freshman apparently has caught the attention of the outdoor clothing giant North Face, which is threatening to sue Winkelmann over his clothing line South Butt.

But that argument just doesn't hold up, according to Watkins: "There appears to be little recognition, if any, that the savvy of consumers precludes anyone from confusing a face with a butt," says the lawyer.

thesouthbuttweb.com
​ Yesterday Watkins sent out a press release in which he and Winkelmann defended South Butt as an innocuous product whose proceeds are being used to complete Winkelmann's education.

"The economy is tough; I know my parents are working hard to help me out with college, I took steps to contribute and now I am being bullied into submission," said Winkelmann, in the release.

Though how much Winkelmann -- who graduated high school from St. Louis' Chaminade College Prepatory -- really needs to help out his parents is unclear. Watkins admits to Daily RFT that he got interested in the case because he and Winkelmann's father play squash together at the exclusive St. Louis Racquet Club.

Whatever the case, though, Watkins says sales of South Butt products skyrocketed yesterday after media outlets ran with the story. Prior to this week, Winkelmann had made just over $5,000 from South Butt clothes available online at Ladue Pharmacy.

Concludes Watkins: "We're going to continue to do everything we can to ensure that capitalism and the 'American Way' are not trampled on and that a creative entrepreneur can still make a go of it in this country."

North Face could not immediately be reached for comment.