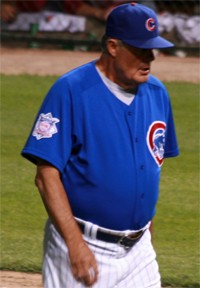 "I flunked square dancing," he said. "I didn't show up for the final, that's what happened."

"What happened was I studied too hard for the biology exam," Piniella said, "and I did OK in biology, but I didn't get to the square-dancing exam after it."

As much as Cardinal fans like to hate -- no, love to hate -- on the Cubs and their longest championship dry-spell in all of professional sports (really, hearing you drunks yell "1908!" over and over right behind me gets old after the first time), they have to remember that Tony La Russa and Piniella actually grew up together and played on the same Pony League team. We're not that different right?

Truthfully, it'd be worse if the outspoken manager earned an "A" in the dancing class. It wouldn't really mesh with his demeanor as the on-field grouch.