Ray Downs
Sister Mary is threatened with arrest when asking police for an ambulance.

The unrest in Ferguson is largely being portrayed as a racial clash between the town's African American community and a largely white police force. And it pretty much is. But even a white-haired white lady can afoul of the increasingly militarized police presence in Ferguson.

Yesterday Daily RFT was on hand when an elderly white nun was threatened with arrest for coming too close to a police line.

On Wednesday police closed off the road where Michael Brown was killed, and a dozen officers in riot gear stood guard in front of a military armored truck. Anybody who came within 50 feet of the officers was threatened with arrest.

Several onlookers stood out in the street, some holding signs, some just angry and unable to resist coming out and watching the display of force in their neighborhood.

At one point Sister Mary, a nun who told Daily RFT she lives in the neighborhood, tried to ask police for an ambulance for her friend who had hurt his leg. But she came too close for comfort for the officers.

"Turn around, or you will be arrested, ma'am," said a booming voice over a loudspeaker. She pleaded but was repeatedly threatened with arrest. Finally, after several minutes, officers said she could bring her friend to the line so he could get access to an ambulance. See also: Police Accused of Unnecessary Force as Third Night of Ferguson Protests End with Tear Gas

As she walked back, residents applauded her and called her brave. A young man walked up to her and have her a high-five.

"They can't be happy with what they're doing," Sister Mary said of the police, as she went to go get her friend. 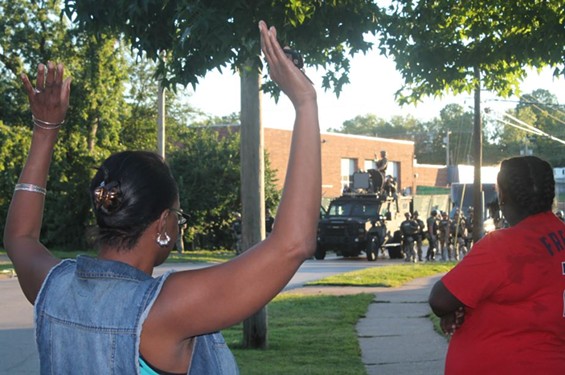 Elsewhere in Ferguson yesterday, resident after resident complained about the heavy police presence in their community.

Will Gidley lives just a few blocks from the police barricade. Standing on West Florissant after the tear gas cleared and police forces moved back, he couldn't help but laugh in disbelief when asked about the police presence.

"I think it's really excessive that they're mobilizing like this," he said while looking at the armored trucks and lines of riot police facing him.

And, he added, it causes a substantial inconvenience for people who live here.

"Forcing us into side streets and things like that so early in the day -- I heard they're forcing people as early as six o'clock," he said. "They're just running around being cowboys with military guns."

Standing on his front porch a mere three blocks from where police began launching tear gas and rubber bullets on protesters Wednesday night, another Ferguson resident told Daily RFT that he can't believe what's happening in his neighborhood. And he has a front-row seat -- his house is on Gage Drive, which runs adjacent to West Florissant Avenue where police have chased off protesters all week.

"I think it's kind of extreme what [the police] are doing. People are upset. Tension is high here. You can see it," he said.

He also feels that the police reaction this week is only exacerbating the problem.

"It has to stop. You can feel it. They're making it worse. I mean, earlier today, they had guys with sniper rifles pointed at kids. It didn't make any sense."