Occupants: Portraits from the protest 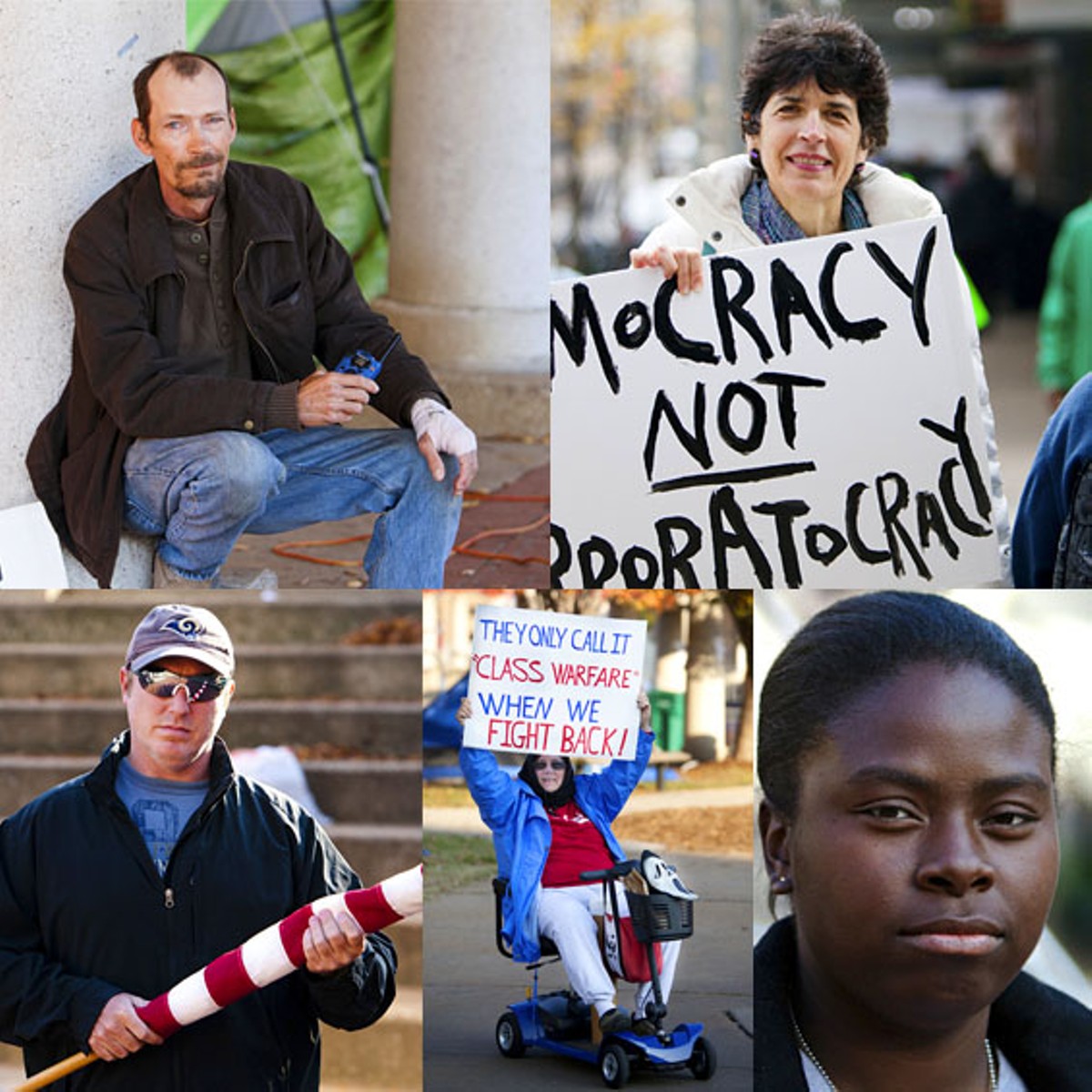 A few of the Occupy St. Louis occupants we profile in this week's RFT. Meet them here. Jennifer Silverberg

Occupants: Portraits from the protest

By just about any measure, the Occupy St. Louis protest that began on October 1 with a Facebook-and-Twitter-organized rally outside the St. Louis Federal Reserve is a low-key affair. The census count tends to tick upward during daylight hours, but full-time residency downtown hasn't begun to approach the "99" in the worldwide uprising's slogan, "We Are the 99 Percent." And while other cities have seen mass demonstrations, arrests by the dozen (sometimes by the hundred) and sporadic violence (typically directed at Occupiers as opposed to instigated by them), aside from a handful of arrests in early October, relations between the citizens of Kiener Plaza and the city that surrounds them have been for the most part civil.

The past week, though, has seen a noticeable chill in the air, détente-wise. On Friday, November 4, St. Louis Mayor Francis Slay issued a proclamation via his favored means of communication with the 3G-and-wi-fi set: i.e., his blog, MayorSlay.com.

Up till now city officials have been tolerant of the protesters, Slay wrote, affording the group "the opportunity to make its points heard and seen during some very high profile events, including a presidential visit and the World Series." But contrary to popular belief, rules are not made to be broken. "I have reminded the people who have gathered there to obey the law or accept the consequences — citations, arrest — of not doing so," Slay's civics lesson continued. "That is the basic formula for civil disobedience in this country."

Though he set no eviction date, Slay cited "bad weather and a rising tide of complaints" and wrote, "I know, and the Occupy participants know, that they cannot stay there forever."

As the cold weather sets in, the mayoral gloves are coming off.

A small but diverse cast comprises the Kiener Plaza tent town: old and young, locals and itinerants, students and teachers, military veterans and anarchists. Some are laborers, others laid-off. A number are homeless, a few well-to-do. They share communal kitchens (and couches), subsist on donated food. They've scrawled protest signs — "Stop the War on Workers!" "Where's My Lobbyist?" "I'm Not Sure What We're Doing, But It's Working" — rigged up a high-tech media center. Some have brought along their house pets to keep them company.

Occupy St. Louis pays no salaries, but the encampment has offered interesting new opportunities to those involved. A former deputy sheriff, new to town and currently unemployed, is the group's director of security. A laid-off inventory manager who spent seven months living in his car handles relations with the homeless locals who've been drawn to the nascent community (and, presumably, the windfall of amenities). A woman who lost her cleaning-service business to hard times organizes the meals. A retired middle-school teacher stops by every few days in her wheelchair to show her support.

The morning after the mayor posted his virtual edict, Terrence Hampton, a 34-year-old salesman from Florissant, led a crowd of 50 through the streets of downtown and to the doorstep of the Bank of America building on North Broadway.

"We are!...," he shouted to the marchers strung out behind him.