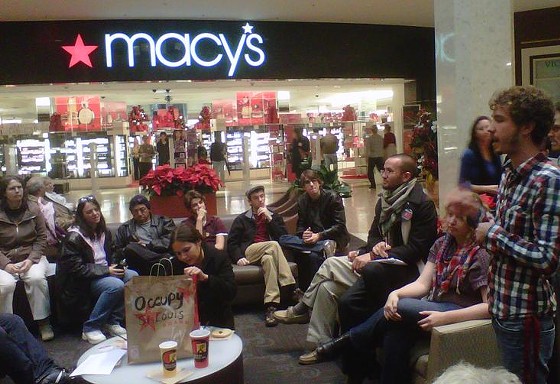 Tony D'Souza
Occupy STL protesters gather outside the Macy's at the Galleria yesterday.
Forcibly evicted from downtown's Kiener Plaza, Occupy St. Louis has taken its protest to area department stores. Yesterday afternoon, roughly 30 Occupiers held a meeting outside Macy's at the Galleria. Later, a few "mic-checked" -- using their collective voices as a human megaphone to shout anti-Macy's slogans -- and tossed fliers from the second-floor banisters to holiday shoppers. Though a larger mic-check had been Tweeted to supporters earlier in the day, the disruptive tactic (used recently against Michelle Bachman, Karl Rove, and President Obama) was scaled down due to police presence. Nearly a dozen mall security and Richmond Heights officers monitored the Occupiers as a police paddy wagon waited outside.

"They shouldn't be allowed," an elderly shopper complained angrily to a mall security officer as the Occupiers met.

Tony D'Souza
Police deployed a paddy wagon to the Galleria, just in case.
Sunday's event followed a Friday action at the Arnold Walmart where, according to one person involved, more than two dozen Occupiers mic-checked slogans just after 10 p.m. Anti-Walmart talking points were read to Black Friday shoppers over the store's "hijacked" PA system.

"People stopped and looked up," explained one source of Friday's Walmart action. "We couldn't let Black Friday go by without doing anything. Our camp is gone, but we're not. We all know we're taking risks, but I don't see it as something that is going to stop." Another Occupier, also asking not to be named, said yesterday, "We're Occupy St. Louis, the greater St. Louis area. This is about taking the movement wherever the movement is needed."

As he stood with his officers watching the Occupy meeting outside Macy's yesterday, Captain Rick Zweifel, field operations commander for the Richmond Heights police department, preferred not to comment, other than to say, "Everything's peaceful."

Though 51 Occupiers have been arrested since the movement began here on October 1st, St. Louis police have taken a notably hands-off approach. St. Louis has seen none of the street battles between riot officers and Occupiers that have occurred across the nation.

Captain Kenneth Kegel, commander of the St. Louis Metropolitan Police Department's 4th District, who oversaw Occupy St. Louis eviction from Kiener Plaza on November 12, said in an interview with Daily RFT late last week, "When Occupy St. Louis began, I went on-line, read articles. Up in Chicago, their approach was a lot more hard line. We've been fortunate. Occupy had been down [in Kiener Plaza] for a few weeks, our bike unit opened up a dialogue with them. If you don't talk to each other, there's that mistrust. The dialogue made for more or less a peaceful conclusion."

Kenneth Kegel
Asked about the Kiener Plaza eviction, which saw the arrest of 27 Occupiers, Kegel offered details about how the SLMPD prepared its officers.

"Years ago we used to do abortion protests on a regular basis," said Kegel. "It's been awhile. We got all the officers together in a roll call, explained what could easily happen, people can get in your face. We made groups of four person arrest teams, went in as teams. The quicker you can get everyone into custody, the more everything can settle down. It only takes one person in that crowd to take it to the next step."

When the police pulled up to Kiener that night, the crowd of Occupiers briefly began yelling obscenities at them, something they hadn't previously done. Kegel said, "There's always that sense of anxiety when you pull up. The minute we got out of the car, you could sense a change. I was kind of surprised [at the obscenities]. You don't know these individuals. You have to stay really focused, can't take anything personal. If people yell and scream, that's not going to hurt you. You have to pay attention to people's hands. One individual was putting a laser pointer in the officers' eyes. We approached him, and he stopped."

A 32-year veteran of the police force, Kegel said that the last thing the St. Louis police department wants when dealing with the Occupiers is for anything to escalate into physical confrontation. His department made a decision to not deploy riot gear for that reason.

"We do have that capability, we can always back out and bring in officers who are better equipped. I don't know if it's a Midwest thing--we seem to have less physical confrontation."

Asked if the widespread use of cell phone cameras -- which recently recorded two officers at the University of California-Davis pepper spraying seated students and led to their suspension -- has had an effect on tactics, Kegel responded: "It's changed policing. You have to be aware that the cameras are there. It might be for the better. It might make officers a little bit smarter." "Our officers have handled our jobs very professionally," Kegel concluded. "I've had a lot of people come after [the Kiener Plaza eviction] and say that."