O'Fallon, Illinois Is Getting a Pricey Skate Park for Summer 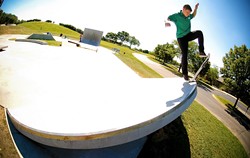 Spohn Ranch Skateparks
Sushi dish at the Aurora, Illinois skatepark.
O'Fallon's aldermen voted unanimously to spend more money to build a larger skatepark with more features than what was originally planned.The total bill is now budgeted at $264,000, up from $150,000. Most of that money will come from grants and the Park Dedication Fund ($125,000), with the parks department's Capital Improvement Fund chipping in another $40,000 to $60,000. That leaves $15,000 to be scraped up, presumably from donations by the Y of O'Fallon and the township itself.

That's the good news for skaters. Even better is the news that the park is going to be 100 percent poured concrete according to Vince Onel, who works in Skatepark Design and Development for Spohn Ranch Skateparks, the California company that's building the park.
Spohn Ranch pre-casts some parks out of their patented material, Spohncrete, but Onel says the planned design for O'Fallon, will work better with poured concrete. "We don't try to steer anybody to one method or the other. Local elements determine which method we use, and O'Fallon's design has a lot of long, sweeping banks. You don't want seams on something like that, so poured-in-place makes sense."

The design for O'Fallon's park is a collaborative effort between the city, Spohn Ranch and local skaters. "Community outreach is a huge part of our process," Onel says. "The City conducted some public outreach at the beginning of the process and they provided us with the info as we were designing. The concept comes from site conditions and (the) budget and technical considerations. It's organic, and the city has final say but we try to incorporate both sides, rider and city."

The park is tentatively scheduled for an early summer opening. Onel's not certain of the start date, but he has an idea of the projected completion date. "I keep hearing 'May,' but we'll be out there as soon as the ground thaws. Once everything's poured, it becomes a race to keep the kids off it so the concrete can set up. We normally tell 'em to wait minimum a week to two weeks, but ideally we say three or four weeks to cure properly."

But the ideal situation doesn't often happen. "If we do our job right, the kids can wait to skate it. That's good, I mean, we want 'em to be excited, but give it some time to cure."

Below is the artist's conception of O'Fallon's park. It has a small stair set with handrail, a large manual pad and a smaller, stretched hexagon block with grindable sides, two bench stand-ins (one descending) and the aforementioned sweeping banks.

Spohn Ranch Skateparks
O'Fallon's park has no vert, but lots of grind potential.