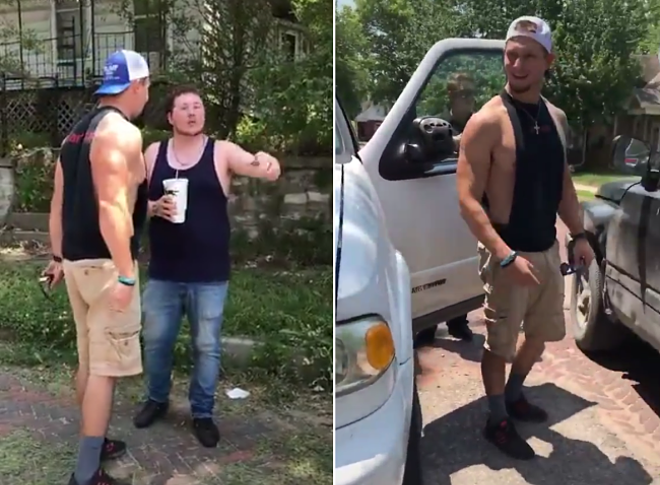 SCREENSHOTS FROM THE VIDEO BELOW
Officer Brandon Harrison has been placed on desk duty after a video of him threatening a couple went viral.

A Missouri police officer has been placed on administrative duty after a video in which he threatens a couple with violence while off the clock has gone viral.

Brandon Harrison, who has been an officer with the St. Joseph Police Department since January 2019, can be see berating a man named Max McLeod in a video shot by McLeod's fiance Summer Bohon and which was posted to Tik Tok on June 17. In the video, Harrison can be seen screaming in McLeod's face. "I’m not working right now. I’m on vacation. I will fuck you up. Sit down," he yells.

A second officer, who is on duty, can be seen in the clip doing nothing to deescalate her colleague's behavior, and in fact tells McLeod to obey the belligerent man. "Do what he says. Sit down," she says.

According to Kansas City's Fox 4 News, police were called to the scene by McLeod and Bohon, who say they were the victims of a hit-and-run at a nearby convenience store by a truck that smashed off the mirror from their vehicle before speeding away. After returning to their home, which is just two minutes from the store, the couple called police to file a report.

One uniformed officer showed up to the scene. Confusingly, though, so did Harrison — clad in a sleeveless shirt and a backwards Trump hat.

Upon arrival, Harrison turned the hit-and-run accusation back on the couple.

“He tried to say that we hit his truck,” McLeod tells Fox 4, “and in all reality, it wasn’t his truck. It was a first [generation] Dodge that hit our car.”

Harrison, however, wasn't having it, and apparently firmly believed the couple had hit his vehicle.

“You don’t fuckin’ lie to her about that bullshit,” he says in the video, referring to the other officer at the scene. “I just watched you hit me.” Throughout the video Harrison is combative, screaming in McLeod's face and calling him a "bitch" while threatening him with violence. When McLeod says that he wants to use a phone to call police, Harrison smirks and says, "We are the police," with a laugh.

“He was spitting in my face because he was so close, threatening to beat me up,” McLeod says. “I just sat down and kind of kept my cool."

"Police officers are the most conspicuous representatives of government and, to the majority of people, they are a symbol of stability and authority upon which they can rely," the department says in a statement to Facebook. "Unbecoming conduct on the part of police officers adversely affects the operations of the department and ultimately destroys public confidence in it. All matters involving officer misconduct allegations are and will be investigated by the department."

The incident comes as protests rage across the country in a historical repudiation of police aggression and systemic racism in the wake of the killing of George Floyd in Minneapolis by now-former officer Derek Chauvin. In Bohon's view, it's another troubling example of an officer that seems to think he is above the law.

“He said that he was going to ‘f’ him up. He said to, ‘Take it to court, bitch, and see who they believe,'” Bohon says. “He was acting as if he had more power, no matter what happened, even if he was in the wrong — like he could hide under his badge.”

Harrison remains on desk duty as the incident is being investigated. Watch the video for yourself below.

He was in a car accident with the other man you see in this video. And this is how he responded.

And yes he is wearing a Trump hat.