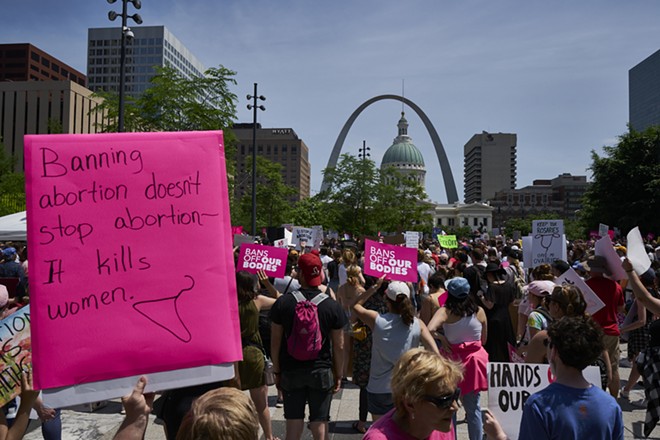 Yesterday, the state legislature in Oklahoma passed a bill that would ban abortions in almost all cases. The bill has a provision that allows individuals to sue abortion providers or anyone who "aids or abets" in an abortion.

According to data compiled by Caitlin Myers, an economics professor at Middlebury College, laws in states neighboring Missouri, including Oklahoma, that further restrict abortion access will have a greater impact on many Missouri women than laws in their own state.

That is because, according to the Missouri Independent, in 2020 only only 167 abortion procedures happened in Missouri, as opposed to nearly 10,000 Missourians who travelled out of state to have the procedure.

Right now, women who live in 75 of Missouri's 114 counties (plus the independent City of St. Louis) are more likely to travel out of state to have the procedure than they are to have it in state, Myers says.

Myers arrived at those numbers by crunching geographic and public health data to determine where women are most likely to go to have an abortion based on which county they reside in. Right now, in about 65 percent of counties in the state, women who get an abortion are most likely to do so out of state. Kansas, which has four clinics that offer abortions, and Illinois, which has a clinic in the Metro East, are the most common locations for Missouri women to travel to if they have the procedure out of state.

Though Oklahoma is far from the most common out of state location for Missourians who have an abortion, its clinics do provide an important source of healthcare for some, especially in southwest Missouri.

Myers' data shows that in McDonald, Jasper, Lawrence, Newton and Barry counties, women who get abortions are most likely to do so in Oklahoma.

But that will stop when Oklahoma Governor Kevin Stitt signs the new bill into law, as he is expected to do.

The Oklahoma bill makes exceptions for cases of rape and incest but only in cases where it has been documented by law enforcement.

The number of abortions in Oklahoma has risen dramatically in recent months after Texas passed its new restrictions on abortion in September, according to two abortion providers in Oklahoma City. The Texas law bans abortion if cardiac activity can be detected in the fetus, which typically happens before a woman knows she's pregnant. Like the Oklahoma bill, the Texas law exposes anyone who aids or abets an abortion to significant legal liability.

Though abortion is still legal in Missouri, a "trigger law" exists that will take effect if Roe v. Wade is struck down, which a recently leaked Supreme Court draft decision forecasts will happen in the coming months. Once the "trigger law" takes effect, abortion will be outlawed with the only exception being in the case of a medical emergency, meaning victims of rape or incest do not have grounds to terminate a pregnancy.