Olympians Know How to Party 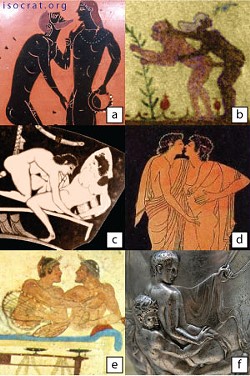 I don't see how anyone can be surprised by this. The Olympics are a Greek creation, after all.
When I think of the Olympics, I think of a great, dignified competition between the greatest athletes the world has to offer. I think of the pageantry and the history and the majestic spectacle that is the Olympic games.
Well, I may have to rethink the way I look at the Olympics, because if recent events are any indication, there's less dignity and majesty than I thought. Way, way more booze, smoking, and sex, though.
Actually, I think I like the Olympics better already.
After defeating the United States to win the gold medal yesterday, the Canadian women's hockey team returned to the ice in the nearly empty arena, drinking pretty much anything they could get their hands on and smoking cigars. Champagne straight from the bottle, cans of beer, and cigars. See, to me, that sounds like a damned fine time.
Of course, the International Olympic Committee is all pissed off about it, calling the celebration disgraceful and shameful and embarrassing and blah blah blah. Lighten up, IOC. It was an empty arena and they had just won a gold freaking medal in their home country. Give them a break already. You guys used to be cool. What changed?
click to enlarge

Marie-Philip Poulin
​On a related note, this time last week I didn't have a favourite female hockey player. Now, though, I do: Marie-Philip Poulin. She's the eighteen year old who scored both goals for Canada in the gold-medal game and followed it up with a cold, frosty Molson Canadian. Molson Canadian is really, really delicious beer. She's talented, kind of cute, and has wicked fine taste in beer. What's not to like?
Oh, and by the way, the drinking age in British Columbia is 19. So she was breaking the law, and now I have to hear about that too. Sigh.
If it weren't enough watching the ladies cavorting on the ice, word has also come that there's an emergency shipment of condoms being flown in to Vancouver due to an apparent shortage. There have already been 100,000 condoms handed out to the 7,000 or so athletes and officials, but that just wasn't enough. Well, what else do you expect when you pack several thousand athletic, competitive people all into the same complex and it's that effing cold?
Thing is, I'm sure there are plenty of athletes at the Olympics who aren't even using condoms. Quite a few, of course, come from cultures with severe sexual taboos, and others have religious objections, I'm sure. So that figure of 14 or so per person is probably way low for the ones who have no compunctions about wrapping it up and doing what needs to be done.
The Canadian Foundation for AIDS Research (CANFAR), has gone above and beyond, getting together approximately 25,000 more condoms boxed up and ready to go. (I can't tell if there's a joke in that sentence or not.) Thankfully, it doesn't look like the prophylactic shortage will force the brave men and women of Olympic Village to do without in their time of need. The people of CANFAR are goddamned saints, I tell you.
So just remember, next time you sit down to watch figure skating, there's a pretty damned good chance that tiny elfin girl with the unpronounceable name spinning around on the ice is drunk off her ass and horny as hell.
And that, my friends, is the true spirit of the Olympics.