On Mizzou's NFL Pro Day, Michael Sam Tells Supporters "I Will Be a Tiger Forever" 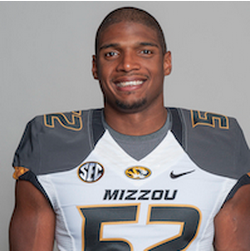 All eyes are on Michael Sam.

As Michael Sam steps back onto his ol' Mizzou stomping grounds Thursday for pro day -- where NFL scouts watch players on their home turf before the draft -- football fans across the country wonder where the man aiming to be America's first openly-gay NFL player will land, if he's drafted at all.

In a letter to his University of Missouri "family" released Thursday, Sam makes it clear that no matter where he goes, his Mizzou days are still close to his heart:

"When I came out last month, I did it with the confidence that my Mizzou 'family' would always be there for me," Sam writes in a letter to the editor in the Columbia Missourian. "To put it mildly, the love and acceptance I felt was amazing."

And Sam says he had to hold back tears when the crowd at a basketball game gave him a warm, overwhelming standing ovation during the trophy ceremony for the Tigers' Cotton Bowl victory. Outside the game, thousands of students, school staff and supporters made a human wall blocking homophobic protests from an anti-gay hate group.

"From my first recruiting trip to the University of Missouri, I felt something extraordinary and special," Sam writes, "something I didn't feel anyplace else. I didn't have a name for it then; I do now. It's called family."

Sam may need his "family" for support if he doesn't get a chance to join the NFL next season. After showing a poor vertical jump and a middling 40-yard dash time at the NFL Scouting Combine, NFL Media analyst Daniel Jeremiah says it's possible Sam won't be drafted.

"He needs to jump better than that at his pro day or I think it's a real chance you're talking about [a] seventh-round pick, possibly even going undrafted," Jeremiah tells NFL.com. Sam isn't talking to media on pro day, but in his letter, he seems unfazed by the intense scrutiny he's under.

"I have a long journey ahead of me, a lot of hard work and many dreams I want to fulfill," Sam writes. "But I do it with the confidence that my Mizzou family will be there for me every step of the way. I will continue to work my hardest; I will strive to make you all proud.

"And I will be a Tiger forever."