On This Day in 1817, Charles Lucas Learned You Don't Pick a Fight With Thomas Hart Benton 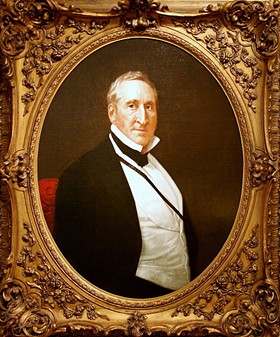 image via
Thomas Hart Benton, after his dueling years.

The most famous duel in American history was the one in Weehawken, New Jersey, in 1804 where Aaron Burr killed Alexander Hamilton. Burr was, at the time, the sitting vice-president of the US of A, which puts Dick Cheney's little hunting accident in perspective -- kind of. Hamilton, meanwhile, went on to be immortalized on the ten-dollar bill.

St. Louis has its own version of this story, too. It may not be as grand, but our two duelists live on in local geography: Thomas Hart Benton (as in Benton Park) and Charles Lucas (as in Lucas Avenue). And that duel happened 193 years ago today. It's not exactly something to celebrate, but hey, it is a piece of our history.

So. Thomas Hart Benton showed up in St. Louis after the War of 1812. In 1815, he was 33 years old. His war record had been somewhat spotty. He had initially attracted the notice of General Andrew Jackson, who appointed Benton as his aide-de-camp, but when Jackson assigned Benton to a desk job in Washington instead of a more exciting combat role, Benton got bitchy. When the two met again in Tennessee in 1813, Benton made his frustration known by instigating a tavern brawl in which Jackson was wounded. (As Benton would say in later years, "General Jackson was a very great man, sir. I shot him, sir.")

Picking a fight against General Jackson was not the best way to insure a political career in Tennessee, so Benton picked up stakes and headed out to Missouri, the same way people in difficulties these days gravitate toward Florida or Arizona. In St. Louis, he hung up his law shingle. started up a newspaper and befriended some of the locals, including Charles Lucas, the 24-year-old U.S. attorney for the Missouri territory and (incidentally) the son of a prominent judge.

All went well for a year or so until Benton and Lucas clashed during a court case which Lucas ultimately won. Benton believed Lucas had insulted him and, as men did in those days, challenged Lucas to a duel. Lucas declined. But the enmity lingered.

On election day in 1817, which was then August 4, Lucas and Benton met at the polls. Instead of greeting each other pleasantly, Lucas publicly suggested that maybe Benton shouldn't get to vote since he hadn't paid his property taxes on three slaves. (In those days, you had to pay your taxes before you could vote.)

Benton retorted, "I do not propose to answer charges made by any puppy who may happen to run across my path."

Clearly such a nasty remark could not go unpunished and Lucas promptly challenged Benton to a duel. The two met up on the morning of August 16 on Bloody Island, a towhead in the Mississippi that was favorite dueling spot for St. Louisans, mostly because it was heavily wooded and because it had been claimed by neither Missouri nor Illinois, which put it outside the legal jurisdiction of both. 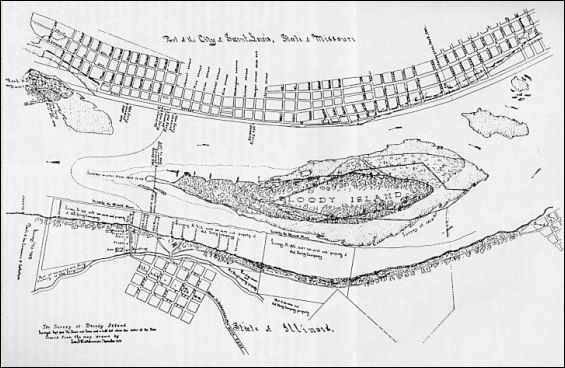 image via
A 19th century surveyer's map of Bloody Island.

The two men stood 30 feet apart and fired. Lucas hit Benton in the knee. Benton hit Lucas in the throat. Magnanimously, Benton offered to release Lucas from the duel, but Lucas declined. Benton, he said, had chosen 30 feet because he knew he was a better shot than Lucas and the distance would give him the advantage.

Fine, Benton said. How 'bout ten feet, you pussy? (Or something like that.) Lucas accepted on the condition that he have some time to recover from his wound.

Or maybe it happened this way: Benton was grazed, Lucas was wounded. Lucas couldn't fire again and said he considered the fight settled. Benton disagreed and vowed they would face off once more as soon as Lucas was well enough to shoot. During Lucas's recovery period, rumors began spreading around town that Benton had suggested 30 feet because he was too scared to get any closer. Benton blamed Lucas for starting the rumors and suggested that next time they shoot at nine feet.

Whatever the case, on this day, September 27, in 1817, Benton and Lucas returned to Bloody Island and faced off a second time at a mutually-agreed-upon ten feet. This time, Benton scored a direct hit to Lucas' chest, wounding him mortally.

As Lucas was carried off the island to be rowed back to shore, he declared "Colonel, you have murdered me, and I never can forgive you." Or maybe he said, "I forgive you." (There's some dispute among our sources here.) In any case, he died.

Three years later, in 1820, Benton was nominated to be one of the first two senators from the state of Missouri. Lucas' father, the judge, objected on grounds that the "rascal" Benton had murdered his son, but he was overruled. Benton went on to serve for 30 years in the U.S. Senate, a period which included both of Andrew Jackson's terms, thus proving that not even killing a man or picking a fight with the president can derail a political career. He later claimed, "I never quarrel, sir, but I do fight, sir, and when I fight, sir, a funeral follows, sir."

However, as he lay upon his deathbed in 1858, he is said to have told his sons-in-law that he felt everlasting remorse for killing Lucas so many years earlier.

Bloody Island, meanwhile, continued to collect silt from the river and began to grow so large that it threatened to block the St. Louis waterfront. In 1837, a group from the Army Corps of Engineers led by then-Captain Robert E. Lee designed a system of dikes and ditches that ultimately connected the island to the Illinois mainland. Its remains lie under the eastern portion of the Poplar Street Bridge.