Editorial: Josh Hawley and the Show-Me Seditionists Failed Us

Sen. Josh Hawley (R-Mo.) gestures toward a crowd of supporters of President Donald Trump gathered outside the U.S. Capitol to protest the certification of President-elect Joe Biden's electoral college victory on Jan. 6, 2021. Some demonstrators later breached security and stormed the Capitol. Francis Chung/Courtesy of E&E News and Politico

DOYLE MURPHY
A photo of Hawley saluting Trump supporters is in heavy use by his critics.

Josh Hawley and his fellow dressed-up traffickers in madness, such as Schmitt and Ashcroft, tend to work the line of plausible deniability. They avoid saying outright that there was massive voter fraud. Instead, they employ cowardly passive rhetoric.

They are "concerned." They have "questions" about our election process. They are just doing their duty to investigate their constituents' doubts, they assure us.

They conveniently omit that one of the main reasons their constituents harbor these doubts is that their elected representatives are fine with scaring them for profit.

Others are less subtle. U.S. Rep. Jason Smith prefers full-on Trump fanboy. On January 5, the day before rioters rushed into the Capitol, he posted "STOP THE STEAL" on Facebook atop a graphic that included false claims of fraud in the presidential election.

"Donate here to FIGHT back and PROTECT our constitution!" the post said, along with a link to an online fundraiser for Smith, which added, "We must defend the Constitution and protect fair and free elections."

The day after his fundraising post, he was there when rioters breached the Capitol and raced around like raging pirates.

Smith later wrote an account of being on the floor of the House when the mayhem began. He describes hearing gunfire and the killing of Ashli Babbitt, the Air Force vet and Trump supporter who was shot by Capitol Police as she and a mob of intruders tried to smash their way into a secure hallway.

"I had to walk past her body as brave officers worked frantically to get innocent people to safety," Smith wrote. 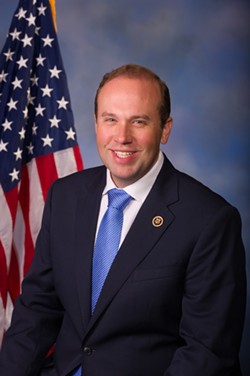 If you're curious if Smith felt any responsibility for what happened at the Capitol, you need only read the introduction to his account.

"Over the past year, we have seen violent protests spread throughout our country, and over and over, those who committed violence were not held accountable. In fact, when the statue of Christopher Columbus was torn down this past summer in Baltimore, Speaker Nancy Pelosi shrugged it off as 'people will do what they do,'" Smith wrote. "This lack of accountability undoubtedly contributed to the shameful display this week in the United States Capitol building."

It is worth noting that the rioters, a mob that had rallied around a gallows erected just outside the Capitol, were heard shouting for Pelosi to be delivered into their hands. But sure, it was Pelosi's fault, and if you agree, you can donate $5 or $10 or $20 ... or $500 to Jason Smith for Congress. Or more if you're a real patriot. The link was still up as of this writing.

Smith and Hawley were among six Missouri Republicans — Reps. Vicky Hartzler, Billy Long, Sam Graves and Blaine Luetkemeyer were the others — who voted to object to the election results, even after white supremacists wearing shirts that celebrated the Holocaust went office by office looking for politicians. They voted against a free and fair election hours after thugs beat police officers with the poles of American flags and paraded the Confederate flag through the halls.

And if they had a duty to be there as our federal representatives, the same can't be said for state Rep. Justin Hill (R-Lake St. Louis) who infamously skipped his own swearing-in ceremony to join the rally of deniers in Washington, D.C. In a January 5 Facebook post explaining his decision, he described it as "one of the most important days of my life."

Hill had previously tried to pass a resolution in our state legislature to say Missouri's elected representatives "have no faith in the validity" of the presidential election results in battleground states that Trump lost. In a letter introducing the stunt, he wrote that "our constituents have voiced concerns over the integrity of our national elections" and that it was his duty and the duty of his fellow lawmakers to demand investigations in Arizona, Georgia, Michigan, Nevada, Pennsylvania and Wisconsin.

"If we fail to act and fraudulent votes change the outcome of the Presidential election, Missourians are harmed," Hill wrote. "We are the Show-Me State. Let us demand other states show Missouri that fraud did NOT change the outcome."

The word "if" is doing some Olympic-level lifting in that statement, given that Hill had no evidence of mass fraud, nothing that credibly suggested secretaries of state, attorneys general, election officials and even judges appointed by Trump were wrong in dismissing claims of fraud. But through Hill's efforts, our state held a hearing. Ex-New York City Mayor Rudy Giuliani even beamed in by video as part of his ongoing campaign of misinformation.

Sixty-six Republican lawmakers signed on, but the resolution ultimately fizzled when it failed to reach the full House for a vote. So whydoes it matter if a state rep wants to go through a charade like that? It matters because it becomes part of the political and cultural vortex. Trump stirs the atmosphere, and politicians such as Hill begin to swirl. The constituents whom Hill claims to care so much about find themselves bombarded from all sides with bad information. They lose their bearings in the spinning. And before long, all they can hear is the roar of a man-made twister of lies about voter fraud, stolen elections and a country under attack.

Hill says he attended Trump's speech in Washington, D.C. Our old friend Giuliani was there, calling for "trial by combat," and Donald Trump Jr. warned any Republican Congressmen thinking of going against the president to expect to be challenged in their primaries: "We're coming for you."

The president had previously told his supporters to go to the rally. "Be there. Will be wild." Onstage January 6, he repeated a lot of those same lies Missouri lawmakers have backed. He praised Hawley by name and told the thousands in the crowd to march on the Capitol.

"We're going to walk down to the Capitol, and we're going to cheer on our brave senators and congressmen and women, and we're probably not going to be cheering so much for some of them, because you'll never take back our country with weakness," Trump said. "You have to show strength, and you have to be strong."

Despite promises to join the group at the Capitol, Trump returned to the safety of the White House.

In a Facebook post condemning the violence that followed, Hill says he also peeled away from the crowd, heading off for lunch before the march began. He says he was still eating when he heard the sirens.

"It truly is sad that such a peaceful event can turn bad so quickly," he later wrote. "Resorting to violent measures takes away from those that want to see honest debate, investigation, and deliberation regarding election integrity. It is also quite obvious to me that bad actors will take advantage of any protest to throw fuel on a fire."