Editorial: Josh Hawley and the Show-Me Seditionists Failed Us

Sen. Josh Hawley (R-Mo.) gestures toward a crowd of supporters of President Donald Trump gathered outside the U.S. Capitol to protest the certification of President-elect Joe Biden's electoral college victory on Jan. 6, 2021. Some demonstrators later breached security and stormed the Capitol. Francis Chung/Courtesy of E&E News and Politico

DOYLE MURPHY
Protesters call for Josh Hawley's resignation during a demonstration on Jan. 9 in St. Louis.

On Saturday in St. Louis, there was another rally. Hundreds of people filled North Broadway in front of the Old Courthouse to call for Josh Hawley's resignation.

"Resign, Hawley!" they chanted from far out of earshot of their senator's new home in Virginia. "Resign, Hawley. You don't even live here!"

They too were angry and frightened about the future of our country. They too are constituents of our elected officials, but Hawley is not listening to them. Eric Schmitt is not going to issue a mea culpa for supporting baseless claims. Jay Ashcroft is not going to admit it was wrong to hamstring access to voting during a deadly pandemic. Jason Smith isn't going to exchange "Stop the Steal" for "Black Lives Matter." And Justin Hill is not going to put everything on hold to travel here to protect the "integrity of our elections."

The politicians who gave credence to the lies that launched a violent mob through the shattered windows of our nation's Capitol like to retreat into "the customer's always right'' shield for their worst behavior. They like to say they are just carrying out the will of their constituents when they demand investigations they know are baseless. They are only asking questions posed by the people of their districts.

If their constituents believe a batshit conspiracy they learned about in Hour Three of a YouTube binge, who are these humble servants to intervene, right?

Hawley retreated into this familiar safehold on the night of January 6 when he and his colleagues returned to the Senate floor. All through the building, the scattered papers of trashed offices, the bootprints of murderous white supremacists and the blood of the dead served as fresh reminders of what rhetoric without principle had wrought. There was literal human feces on the walls of the Capitol left by people who cheered Hawley's raised fist that morning.

Behind him, ruining the visuals of Hawley's moment in front of the camera, sat an exasperated Sen. Mitt Romney, glaring at the back of Missouri's junior senator's head.

Romney is the kind of guy who has found himself on the outside of Trump's Republican Party. As Hawley's star has risen in the emerging galaxy of fanaticism, Romney's has cratered for the sin of occasionally opposing the president. That night, when it was his turn in front of the microphone, he explained to the country what politicians such as Hawley are too cowardly, too "ambitious" to admit.

"For any who remain insistent on an audit in order to satisfy the many people who believe that the election was stolen, I'd offer this perspective: No congressional audit is ever going to convince these voters, particularly when the president will continue to say the election was stolen," Romney said, his voice rising toward his point. "The best way we can show respect for the voters who are upset is by telling them the truth."

Hawley will not do that. So he should listen when his constituents take it upon themselves to tell him the truth. He should listen when they say they don't want his brand of politics anymore. Or maybe he should just read it. They left him a note, painted in giant yellow letters there in front of the Old Courthouse. It read: "RESIGN HAWLEY."

Doyle Murphy is the editor in chief of the Riverfront Times. 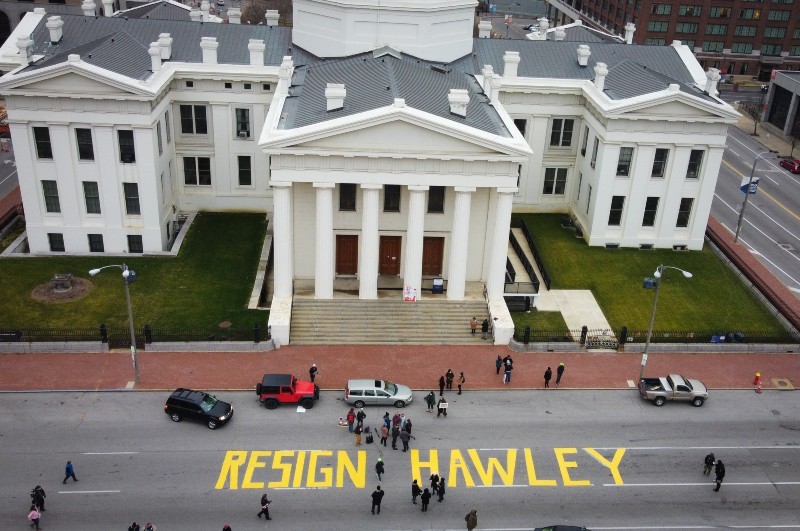