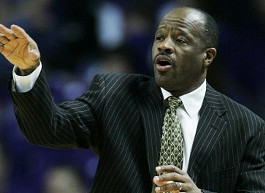 image via
Mike Anderson is pointing west -- MU fans are hoping he doesn't move that direction too.
On Tuesday University of Oregon athletic director Pat Kilkenny denied rumors that Missouri's Mike Anderson turned down an offer that would have paid him $3 million annually to replace the fired Ernie Kent as the Ducks' head basketball coach.

Yesterday, The Oregonian confirmed that Kilkenny met with Anderson in El Paso to discuss the job.

Time for Tiger fans to panic?

At first glance the Oregon job is a sweet one. The school has strong ties with Nike -- founder Phil Knight is an alum and the company headquarters is a short drive away from the campus -- and they just opened a shiny new on-campus arena named after Knight's son. Add that to the fact that $3 million would almost double Anderson's current salary and yeah, there's cause for concern among the MU faithful.

There is, however, a catch. The Oregon athletic department has been an absolute mess lately. Former football coach turned athletic director Mike Bellotti left the school to be an ESPN talking head and his $2 million severance payment came under investigation by the state's attorney general. The football team has had a litany of ugly off-field incidents, lowlighted by their Heisman candidate quarterback getting arrested for stealing electronics from a frat house.

A half-dozen other high profile hoops coaches -- including Tubby Smith, Jamie Dixon, Mark Turgeon and Brad Stevens -- have already passed on the job, which has been open since Kent was told he'd be fired in February.

Anderson has turned down equally attractive offers in the past, including a $2 million per year gig in his native Georgia. He also just signed a seven-year extension with Mizzou. Oregon has floated some ridiculous prospective coaching candidates (most absurdly Michigan State's Tom Izzo) so while Mizzou may want to consider offering Anderson another raise, they shouldn't be sweating too much about him taking The Fastest 40 Minutes to the Pacific Northwest.