The rings were traveling from China to Jerseyville, Illinois

Riverfront Times File Photo
A replica of the Lombardi trophy in Ballpark Village during the Super Bowl.

The rings, captured at a St. Louis express consignment operations hub, arrived in the United States from China, authorities said in a press release on Monday. The shipment was traveling to a residence in Jerseyville, Illinois. 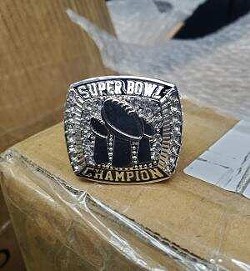 U.S. Customs and Border Protection
These fake Super Bowl champion rings were seized by U.S. Customs and Border Protection in St. Louis.
If real, the total shipment would have been worth $300,000. The rings featured the design of three Lombardi trophies and the phrase “Super Bowl Champion.” When the rings arrived in St. Louis, an import specialist analyzed the shipment, determining they were fake.

“Counterfeit jewelry continues to flood the e-commerce market, and these rings were focused on a select group of sports collectors and their fans,” Director of Field Operations-Chicago LaFonda D. Sutton-Burke said in the press release. “Our officers are well-trained to find counterfeit merchandise like these in support of CBP’s mission of protecting the American public and the American economy.”

In 2021, the U.S. Customs and Border Protection gathered over 375,000 items of counterfeited jewelry, worth over $550 million if real.