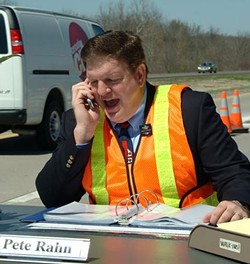 modot.com
Rahn drew attention to highway work zones in 2006 when he set up his office alongside a Missouri freeway.
Updated 4:25 p.m.

MoDOT informs Daily RFT that it has entered into 52 contracts with HNTB since Rahn's arrival with a total cost for those contracts at more than $75 million.

The head of the Missouri Department of Transportation is leaving his position next month to take a job with Kansas City-based engineering and construction firm HNTB.

The charismatic -- and at times controversial -- Rahn has served as director of the MoDOT since September 2004.

Rahn made waves back in 2007 when he pushed through a plan to completely shut down Interstate 64 during reconstruction of the highway through St. Louis. That decision was later hailed as a success with the $530-million project finishing below budget and earlier than expected.

Throughout his tenure with MoDOT and a similar stint with the New Mexico State Highway and Transportation Department, Rahn has pushed for more private-public partnerships and so-called "design-build" projects, which award large contracts to a single company that's charged planning and constructing roadwork simultaneously.

One of those companies is HNTB, for whom Rahn will serve as a vice president beginning April 26.

In 2008, under Rahn's supervision, MoDOT award HNTB the contract to design the $640-million new bridge to span the Mississippi River in St. Louis.

Last year the MoDOT and HNTB together won an industry award for a partnership to explore ways for improving traffic along Interstate 70 through Missouri.

Today Daily RFT contacted HNTB to ask them about their previous relationship with Rahn and how/if its connection to MoDOT influenced their hiring of him. The company declined to comment on Rahn's hiring until he joins the firm next month.

Meanwhile, we've submitted a request with MoDOT for all contracts awarded HNTB -- and their costs -- under Rahn's leadership.

Back at you when we have that info.