Peter Kinder and the "Wicked Infection" 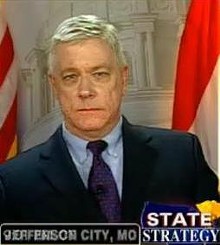 Peter Kinder: Now famous for his "wicked infection."
Note to Peter Kinder: When describing one's health problems, probably best to go with phrases like "a little bit under the weather" or "touch of the flu."

In fact, when running for Governor, especially when just coming off a scandal involving sketchy bars and stripper poles, we would go so far as to advise that one should never, under any circumstances, employ the phrase "wicked infection."

Kinder, who is Missouri's lieutenant governor and the likely GOP gubernatorial candidate in 2012, made headlines this summer for stopping in at a (now closed) bar in the Grove known for its "pantless parties," but supposedly just to use the restroom, as well as his (now admitted) infatuation with a stripper in the mid-90s, but supposedly only in a Dean-Martin-esque platonic way.

The scandal had finally stopped making the news in recent weeks -- Kinder was starting to get some donations above $5,000 after a long pause and political chatter in town was finally about something other strippers.

But then, last week, Kinder explained his recent lack of campaigning to the St. Louis Beacon by saying that he had a "wicked upper respiratory infection."

The result of that blunder can now be glimpsed on Google. Just pop "wicked infection" into the mighty search engine, and look what comes up: Kinder's got four of the top five results.

So while he may not be polling all that well against Governor Nixon, when it comes to running against computer viruses. Kinder takes not just the gold, but the silver medal, too. Nice work!

(BTW, now that Google changes search results depending on where you're searching from, we worried that maybe Kinder's dominance of "wicked infection" results was St. Louis specific, since, you know, this is where news of his pantless parties/stripper obsession/actual infection broke. Au contraire; when we changed our location to New York, New York, the placement was still the same: Kinder scored the top two results in our "wicked infection" Google search, plus No. 4 and No. 5. So this is not regional boosterism: The guy really does dominate.)