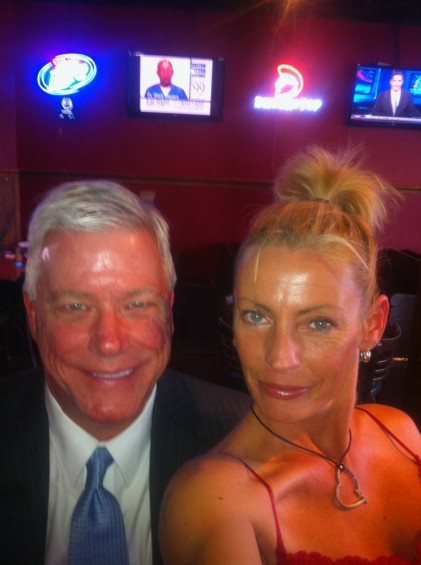 Peter Kinder with a bartender at Verlin's, a nightspot that proclaims "every night's a pantless party!"

Yesterday we showed you a picture of Missouri Lt. Governor Peter Kinder, grinning broadly at a bar with an unidentified blonde.

Today we can tell you where that photo was taken: Verlin's, a south-city bar famous for its "pantless parties." That's not to say the lieutenant governor wasn't wearing pants: The comely bartenders at Verlin's sling drinks in their undies; the patrons evidently remain fully clothed. As the bar's ad in RFT proclaims, "Every night's a pantless party."

A bartender at Verlin's, which recently moved from Soulard to Vandeventer, in the Grove district, confirmed to RFT that Kinder is a fan of the establishment. "People might catch him here," she said. "I'm not saying he's here every day..."

And the sexy blonde with whom Kinder is posing, Daily RFT can confirm, was a Penthouse "Pet of the Month" in the early '90s. She was a bartender at Verlin's at the time the photo was taken.

Kinder, a Republican, is widely believed to be planning a run for governor. The never-married Cape Girardeau native is a favorite of the Tea Party.

Kinder's spokesman, Jay Eastlick, expressed some skepticism over the governor's presence at Verlin's when we reached him this morning.

Added Eastlick, "I don't know where he was -- whether he was there, or at some other place. I wasn't with him!"

UPDATED at 1:25 p.m. with new information about the woman in the photo.

A few days after this post was published, we interviewed the woman, Tammy Chapman. She had a lot to say about Peter Kinder. You can read it here. On August 11, Kinder finally made a brief statement, claiming Chapman's story is not true.