Phineas, a three-and-a-half-year-old labrador retriever in Salem, may not have much longer to live.

That's because officials in the south-central Missouri city deemed him "vicious" after a biting incident involving a seven-year-old girl last year. But in response to the city's plan to put the dog to sleep, the family who owned the dog and a vocal group of supporters have launched a legal battle and social media campaign to save Phineas, who, they say, is a completely harmless dog that the city is stubbornly and aggressively targeting.

Even the family of the biting victim supports the effort to save Phineas from euthanasia.

"Everybody that meets this dog says he's a sweet dog...and everybody in the city of Salem knows this dog is not vicious," says Joe Simon, an attorney who has been working pro bono in this legal fight. "This is an injustice."

Simon shares with Daily RFT a pile of documents in support of Phineas, on view below, including testimonials from experts, vets, shelters -- and even the parents of the little girl who was bitten.

Why, then, does Salem have a plan to euthanize the dog?

The saga started with a June 22, 2012, incident at the home of Salem residents Patrick and Amber Sanders. Their daughter Lexi, age seven at the time, was playing with another seven-year-old girl, a neighbor, whom Phineas apparently bit, says Simon, attorney for the Sanders family.

Here is a picture of that bite, courtesy of Simon, a Kirkwood-based lawyer. 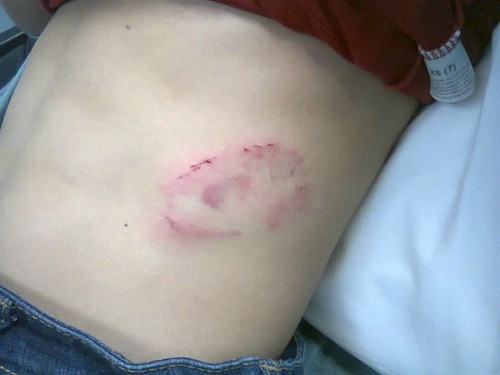 Simon says it was minor, but the family went to the hospital just in case. He says that the wound did not require stitches, and the girl was prescribed an antibiotic ointment. He also offers a statement (on view below) from a "certified canine behaviorist" and trainer who says that this was a low-level, "superficial" bite that did not involve puncturing of the skin. The family didn't press charges.

But, as is standard protocol, the hospital reported the bite to police, Simon says, and officials in response took Phineas away from the Sanders family, because they believed there were two other past bite incidents. Records show they also had concerns about whether his vaccinations were up to date.

Simon says that those two other alleged cases did not happen, and that they were later discredited in court. (According to a court transcript, the girl said, "Phineas kind of nibbled on my arm" in reference to past bite.)

After a follow-up hearing, Salem officials ruled that Phineas must be put to sleep.

For nearly a year now, the family has been unable to reunite with Phineas, and Simon has filed an injunction to block the possible euthanasia. A judge recently issued a temporary restraining order that says the city cannot kill the dog, cannot sell him and must take care of him. City officials are meeting tonight in a closed session to discuss the litigation, and there is another court date scheduled for next week.

All of these details aside, the parents of the girl who was bitten don't want to see Phineas put to sleep, either. They write in a letter to the city and judge (full version on the next page):

We are asking that you reverse your determination that Phineas, the dog that bit our daughter, is "vicious." We do not want the dog to be euthanized.

We ask that you do everything in your power to achieve this result.

The two girls, now both eight, are still friends, Simon says, adding, "The little girl who [got bitten]...has forgiven Phineas for biting her and just wants Lexi to have her dog back. To me, that makes her one of the heroes in this story."

Continue for response from the mayor of Salem and copies of the documents in this legal battle.