All photos by Danny Wicentowski
Yesterday, the St. Louis Metropolitan Police Department shot and killed eighteen-year-old Mansur Ball-Bey in the Fountain Park neighborhood. What followed was a familiar sequence of anger and protest, police tear gas, and several fires lighting up the night sky.

Police say Ball-Bey was killed late Wednesday morning after he ran from officers executing a search warrant on a house near Page Boulevard and Walton Avenue. During a press conference, St. Louis police chief Sam Dotson said the teen pointed a gun at two officers, who responded by opening fire.

According to the incident report, officers fired at the teenager while “fearing for their safety" — an expression heard often from police this past year. And the protesters who converged on the intersection of Page and Walton made no secret of their suspicion of that official narrative.

Protesters and residents were outraged at the presence of armored police vehicles and heavily armed officers.
click to enlarge

When Riverfront Times arrived at 7:20 p.m., officers in riot gear were arrayed against chanting activists. Although police had deployed tear gas earlier that evening and made several arrests, some in the crowd thought the night would end peacefully.

An hour later, near the intersection of Page and Vernon, a car was set on fire. 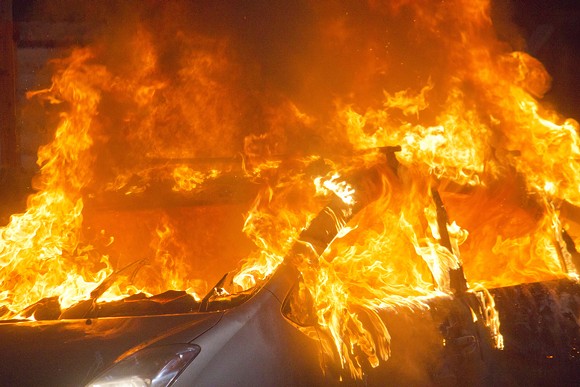 By the time we returned to Page and Walton, fires were burning in the middle of the street. People could be seen dragging pieces of furniture to the road and spraying lighter fluid on the blaze. Police later reported that a nearby shop had its door kicked in.

At 9 p.m., firefighters arrived to extinguish the fires in the roadway. Soon after, however, a rising plume of smoke could be seen drifting north of Page. Police cruisers and a fire engine sped to the location, where a house was burning.

As we approached the fire, a man in a Cardinals baseball cap and dreadlocks approached and insisted he had something to say about the night's events. He introduced himself as Maximillian Arredon.

"This is my hood, my block, this is where I'm from," he said. "I just want to say, with all this chaos is going on, I'm not going to blame it on the police. But I'm just saying, they need to get out here in the streets, they need to talk to people. They act like they just want to ride down and lock people up. Get to know me first, get to know why I'm acting why the way I'm acting. Get to know why we got the mentality we got."

In Arredon's view, whoever set fire to the house was trying to send a message: "We not getting the education we need, we don't know nothing better. This how we brought up."

Later that night, another house, also apparently vacant, was set ablaze. It's still not known who set the fires, though several activists (here and here) have said the fires were not started by black residents or protesters.

By the end of the night, St. Louis police arrested nine people, seven men and two women. All were charged with impeding traffic, and one woman was additionally charged with resisting arrest. Early this morning, the St. Louis Metropolitan Police Department posted footage of water bottles being thrown at officers during the face-off with protesters.