Photo: Jennifer Silverberg
Meet Junior. He's an eleven-year-old American Pit Bull Terrier who was handed over to Broken Hearts, Mended Souls Rescue. See more photos of rescued dog-fighting dogs.
Six dogs rescued from the largest dog-fighting ring in U.S. history were put up for adoption this week with rescue groups in Missouri and California. The dogs represent just a small fraction of the more than 500 canines rescued from the criminal syndicate this past summer.

On July 8 federal agents swooped in to arrest 26 people in a dog-fighting ring that spread across eight states and involved hundreds of canines. The raid followed an 18-month investigation involving the FBI, the Humane Society, Missouri State Highway Patrol, the U.S. Marshals Service and other agencies.
Some of the dogs seized in the raid were pregnant at the time and have gone on to deliver several litters. And, yes, even pit-bull puppies are pretty darn adorable.
click to enlarge

Photo: Jennifer Silverberg
PUPPIES!!!! More than twenty of the dogs rescued were pregnant and have gone on to deliver more than 100 puppies like Sophie (left) and her brother, Brutus. See more photos of rescued dog-fighting dogs.
Since July 8, all the 500-plus dogs rescued in the raid have had veterinary examinations and spay/neuter surgeries. Here's a peek at some of these amazing survivors...

Photo: Jennifer Silverberg
Fay, an incredibly and almost surprisingly sweet dog was probably the saddest story of the day. She's an American Pit Bull Terrier, approximately 5 years old. She has terrible physical damage to her face that is not unheard of with dogs associated with dog fighting. She is missing both her upper and lower lips and a small part of her nose. See more photos of rescued dog-fighting dogs.

Photo: Jennifer Silverberg
Jakob is a one-year-old American Pit Bull Terrier. He, along with Fay, was today released to Mutts-n-Stuff, a St. Louis based bully breed rescue group. Jakob will next be taken to a rescue group in San Francisco organization, Our Pack. The plan is for Jakob to become a therapy dog. Our Pack is the same organization that rescued Leo from the Michael Vick case. See more photos of rescued dogs. 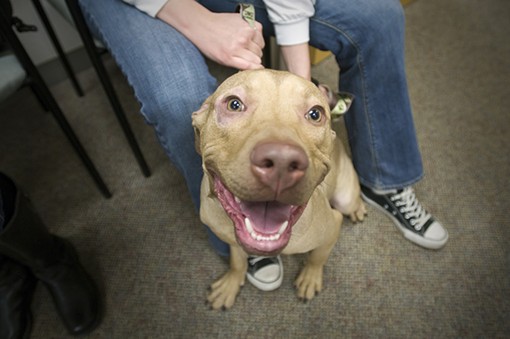 Photo: Jennifer Silverberg
Carlos really loves looking at himself in the mirror. He will then proceed to "play" with the other dog. See photos of more rescued dog-fighting dogs.

The True Cruelty of Dog Fighting:
What is dog fighting and why is it such a bad thing?
Dog fighting is a brutal, vicious, heinous crime, animal abuse at its absolute worst. It is often associated with other illegal activities involving drugs, weapons, gambling.
· The most aggressive male and female fighters are bred, sometimes forcefully.

· Training is rigorous using tread mills, often with smaller caged animals as bait. Dogs are also forced to swim for hours at a time in a pool or run behind a vehicle to build stamina.

· They spend their lives on the end of a heavy chain, often half of the dog's weight, to build neck strength.

· As early as four months of age the dogs are forced to begin "rolling" -- an abbreviated, controlled fight to find out if the dog has the fighting spirit.

· All the fights are brutal; dogs are encouraged to inflict as much damage to an opponent as possible. A dog fight can be short, if an opponent is quickly defeated, or as long as two hours ending in death, sometimes for both exhausted, bloody, injured dogs.

· Dogs that don't win often are brutally killed on the spot by hanging, drowning, strangling, electrocution, shooting or in other inhumane ways.

· Daily life is cruel, too. Often the dogs are kept in remote areas tethered to a 30 lb. heavy-gauge chain locked onto a 4" wide heavy collar. (Necks rubbed raw or embedded collars are common.)

· The water source is a dirty bowl filled with rain; so water, when available, is always filthy. For some, food may come only once or twice a week. Houses often are plastic or metal barrels with jagged doorways and little or no bedding.

· Because this activity is so underground, veterinary care is minimal. "Stop the bleeding and get back to the ring" is the rule, according to HSMO Animal Cruelty Investigators.

· Many dogs suffer from multiple wounds and scars; some have torn or missing ears; some are missing limbs. One dog from this rescue has no lips, her teeth perpetually showing.