PHOTOS: In Forest Park, a Forest of Flags and Memories of War

PHUONG BUI
A small boy stands among the rows of flags on Art Hill during the "Flags of Valor" memorial.

Standing ten feet tall each and weighing a combined 24 tons, thousands of flagpoles lie planted across Art Hill in Forest Park. If set end to end, the rows would stretch eleven miles, a reflection of the country's long and terrible road through twenty years of war.

It's a journey that's only recently concluded with the U.S. formally leaving Afghanistan, though not without adding yet more loss, and more flags. Among the forest of flags is one representing Wentzville-born Lance Cpl. of the Marine Corps Jared Schmitz, one of thirteen U.S. service members killed on August 26 during a suicide bombing attack on the Kabul airport in Afghanistan.

This is the third such Flags of Valor event, which has been held every five years at Art Hill since the terrorist attacks of September 11, 2001. In 2016, on the fifteenth anniversary, the organizers needed only 6,869 flags.

PHUONG BUI
Arranged over ten acres, it took about 500 volunteers to set up the thousands of flags.

But in this forest of flags, among the faces of twenty-somethings staring out from small photos clipped with dog tags, there is the sound of children.

In one row, a little boy, impeccably dressed in a newsboy cap and vest, blows several piercing notes on his recorder as his mother, Krystal, snaps photos of the four-year-old from her spot on the grass.

He's too young, of course, to know much about war or what the flags around him mean. But when he's older, when he does understand, she wants him to be able to see himself in this place.

"I just want him to look back on this and see this as something he's a part of," she says. "I don't know what he's going to be when he grows up, you know? He might want to join the Army. This is something he can look back on and know what it was to experience this, and the people who lost their lives." 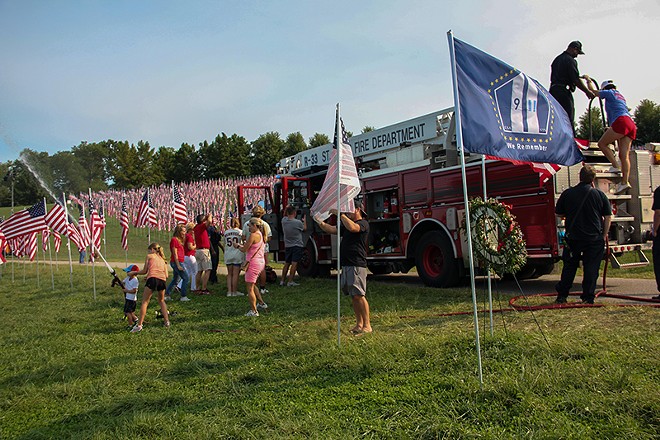 DANNY WICENTOWKSI
St. Louis Fire Department trucks were on-site for the "Flags of Valor" memorial on Art Hill this week.
The flag memorial goes beyond just military service members. At the foot of the Grand Basin, the flags represent the 412 first responders who perished in the 2001 attacks.

Nearby, Laurie watches her two grandsons, ages one and four, take turns gleefully blasting a stream of water from the pressurized hose of a fire truck parked onsite.

"I just told them that we're lucky to have people who fight for our country," she says, describing what she told the two boys as they walked through the flags toward the firefighters and their truck. "They don't understand a whole lot yet, because they're so little, but they will someday." 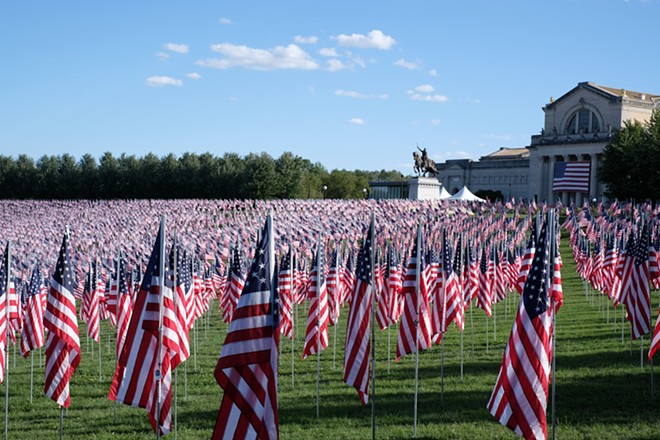 At the top of Art Hill, in the shadow of the statue of King Louis IX, event volunteers Katy Kruze and Debbie Gui assist visitors with finding specific flags at which to pay respects.

The feeling of walking through the rows can be a kind of out-of-body experience, Kruze says. She mentions that she had helped one man locate six flags, all young men he had known and who had died in Afghanistan.

Next to her, Gui nods her head. She interjects to note that family members of Jared Schmitz, whose remains were escorted by thousands of people after arriving in St. Louis on September 8, have made multiple visits to his flag.

Gui's own son, an Army combat engineer, has only recently completed his service with the military and returned home to continue his life. She can't help but think about how many people his age didn't get the chance.

"It hits close to home, to think about that," she says. "To think that he wasn’t, but he could have been, a flag." 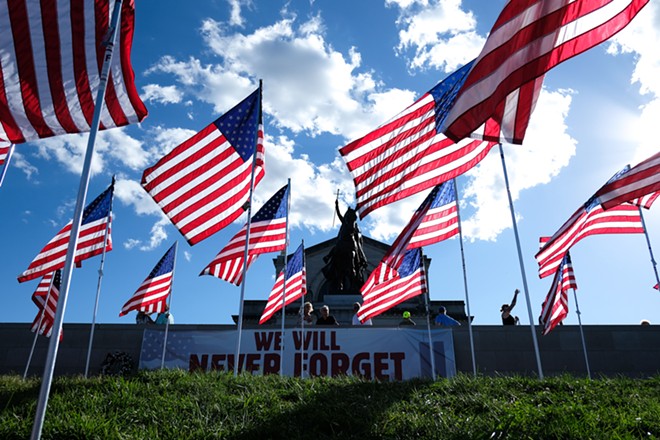 PHUONG BUI
After two decades of war, more than 7,500 have died in military combat in the War on Terror.

Near the western edge of Art Hill, the man whom she and Kruze helped locate six flags is still working through the list. James Presson had spent 30 years as a police officer in St. Peters before signing on as a civilian contractor with the U.S. Department of Defense. He deployed to Afghanistan in 2010, eventually spending two years working and fighting alongside soldiers decades younger than him.

"I had the privilege of being boots on the ground with them," he says.
"I was a civilian contractor, but I served two years with the Army. I wore a uniform, carried a rifle. I just looked like the next guy — except I was 51."

On his visit to Art Hill this week, Presson wears the same dust-colored rucksack he carried in Afghanistan. The bag is stenciled with "JIMMY K," an abbreviated nickname commended to him by a member of the 101st Airborne shortly after he arrived.

Though Presson was an outsider, the unit accepted him as their own. But on November 1, 2010, a suicide bomber attacked the unit after their return from a patrol. The blast instantly killed Army Pfc. Andrew Meari and wounded Sgt. Jonathan Curtis. In the ensuing firefight, Presson says he and others struggled to cover ground on an embankment to reach Curtis and additional casualties. 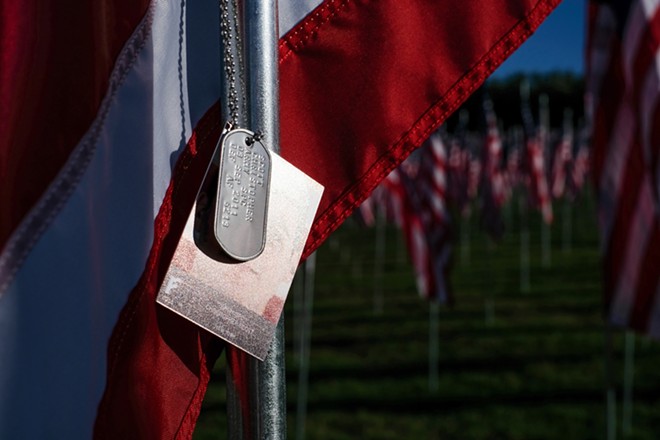 PHUONG BUI
A photo and dog tags are affixed to each of the 7,500 flags.

Pulling out his phone, Presson retrieves a photo he took of Curtis' flag and dog tags earlier that afternoon. Curtis had been 24, three years older than Meari.

"Curtis, he's the one I gave first aid to," Presson recalls. "I thought that he was still breathing and showing signs of consciousness. I really thought that he was OK, and we patched him up and he got inside. I didn't even know till later that he had died.

"It just broke my heart," he adds, "because I thought we did something."

Presson grew up already knowing the devastation of losing someone in war. His father perished in Vietnam in 1966, and over the years he says he came to lean on the veterans in his life for understanding and support. Now, walking through the flags on Art Hill with a list of six names, he's hoping to provide similar support for the families of the young men he served with.

DANNY WICENTOWSKI
James Presson looks through the field of flags for the members of the unit he served with in Afghanistan.
But he knows that nothing can replace a loved one. In St. Louis, the family of Jared Schmitz is hurting in ways he knows too well.

"With Jared coming home this week, my anxiety level was so high, because you know how the parents feel. I've been there when the knock comes on the door," he says.

With the evening sun sending golden rays of light through Forest Park, Presson reaches out to a nearby flag, smoothing the fabric and folding it over in his fingers. It does him good, he says, every time he touches a flag and thinks about what it means, and the soldiers carried in its fibers.

"It warms my heart that there's people who want to know, who want to come out and see this themselves and to be able to tell their grandkids about it," he says. "I think that's the part we have to learn, as far as healing. You do have to talk about it. Otherwise, you stay angry." 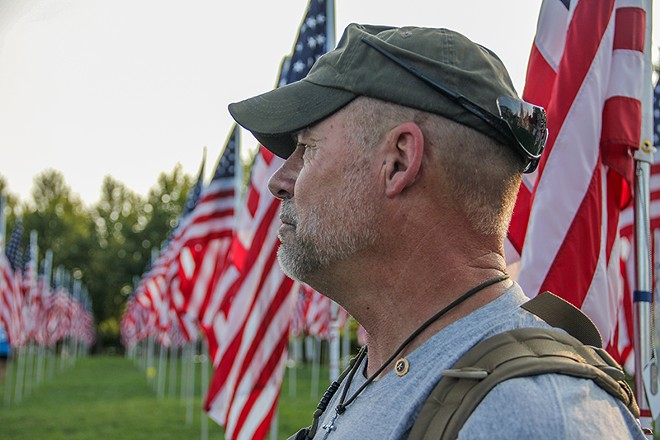 DANNY WICENTOWSKI
"Every time I touch a flag, it's like every fiber, every stitch, is another veteran that has lost their lives," Presson says.