Bryan Sutter
One of the 32 protesters arrested yesterday during a failed attempt to block I-70.

Protesters attempting to block Interstate 70 were rebuffed yesterday by the combined forces of the St. Louis County Police Department, the Missouri Highway Patrol and a massive thunderstorm.

Organized by St. Louis activists Eric Vickers and Anthony Shahid, the act of civil disobedience was meant to protest St. Louis Prosecuting Attorney Bob McCulloch's role in the Michael Brown/Darren Wilson investigation. Vickers helped organize a similar blockade in 1999, when hundreds of protesters halted I-70 to protest unfair hiring practices on road projects. This time, however, the protesters never made it to the road.

"Regardless of whether we're on the freeway, we're here to protest, and that's the only thing that matters," said Maurice Brown, a member of the Disciples of Justice and New Black Panther Party minutes before the protest's planned 3 p.m. start time. "This is not black or white thing, this is for human rights."

Bryan Sutter
Some protesters lay down in the middle of the road near the I-70 off ramp. They were arrested.

Lines of police officers, some in riot gear, managed to corral protesters within the intersection at North Hanley Road not long after 3 p.m., with dozens more law-enforcement vehicles stationed at the on and off ramps. Though the protesters' efforts to block I-70 ultimately failed, the heavy police presence created its own considerable traffic disruption.

A view of the #Ferguson Michael Brown protests via @Bommaritoauto SkyFOX helicopter pic.twitter.com/1OFIn75qUi

Yesterday's protest didn't include the salvos of tear-gas canisters that were commonplace during Ferguson protests last month. However, police did continue the tactic of arresting protesters for unclear reasons. 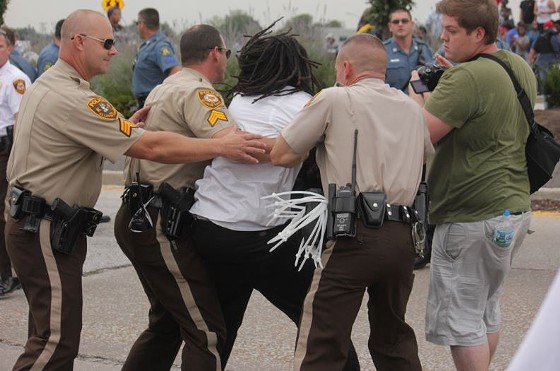 Danny Wicentowski
Minutes after this arrest, the man to the right (in green) was arrested while crossing the street.

According to Missouri State Highway Patrol spokesman Al Nothum, officers were hit with bricks, concrete chunks, plastic water bottles and glass bottles. Daily RFT observed objects thrown at officers, but many arrests involved protesters who were simply crossing the street. Others were seemingly picked at random.

After an hour had passed, the standoff between police and protesters briefly erupted when a large group marched toward the police line. In the chaos, bottles were thrown. One protester fled, and multiple officers chased him into an apartment complex across the street. At the same time, police also arrested a man in a nearby gas station, though bystanders loudly complained that he had not done anything to warrant police attention.

Here's a clip of the latter part of the incident, captured by Umar Lee.

Among the 32 arrested were Anthony Shahid, Urban League president Michael McMillan and homeless advocate Reverend Larry Rice, a man who is no stranger to arrest.

By 5 p.m. much of the crowd had dispersed. Some protesters headed to the Ferguson Police Department, but the evening's thunderstorm and heavy rains drove the rest of the crowds off the street.

For more photos of the arrests and police actions from yesterday's I-70 protest, check out RFT's full slideshow.