Photo: Nick Lucchesi
The entire press conference was filmed to be included in the television series.
To hype his upcoming reality show Shaq VS., Shaquille O'Neal, the 17-year NBA icon, mixed friendly smack-talk and humble sentiments at the opportunity to face Albert Pujols in a home run derby Thursday afternoon in O'Fallon, Missouri.

"St. Louis, Michigan, how are you?" O'Neal joked after sitting down at the conference table, positioned on the shadeless rooftop of the Four Seasons hotel downtown.

O'Neal said he felt like a "kid in a candy store" at the chance to take on Pujols, but didn't short-change himself, saying that if he lost to Pujols, he'd don a pink Speedo and run the bases (though it was unclear whether it would be the bases of Busch Stadium or T.R. Hughes Ballpark, where the contest will be held.) 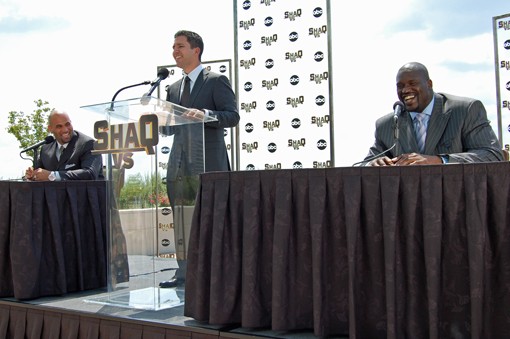 Photo: Nick Lucchesi
While the four-time NBA champion took in his first full baseball game last night at Busch, he made a few passing references to being a Tee-Ball All-Star, and dubbed himself "Shaqie Robinson" as a hitter and the "Big Black Unit" as a pitcher. Pujols admitted to being a point-guard in high school but that he could no longer dunk.

Pujols also took questions, and diplomatically dodged one about who threw a better first pitch, President Barack Obama during the All-Star Game, or Shaq on Tuesday night -- until O'Neal confidently chimed in, "I'm better."

Photo: Nick Lucchesi
The 7'1" O'Neal helps the 6'3" Pujols onto a chair for a photo-op.
St. Louis Cardinals coach Dave McKay will throw the pitches to both players during the contest, in which O'Neal will have a handicap of a smaller outfield than Pujols. However, O'Neal's bat, an aluminum one, weighs in at 37 ounces, while Pujols' standard is 34.5 ounces.