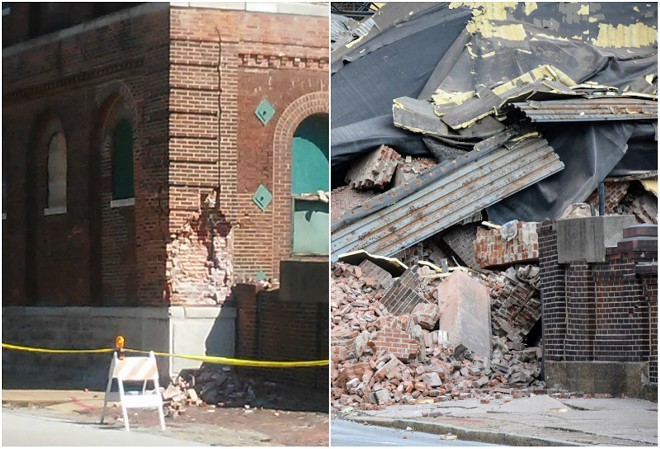 AARON P. BURY/DOYLE MURPHY
Before-and-after photos of the corner of a Lemp Brewery building that collapsed.

In the days before the side of a Lemp Brewery building collapsed, the damage to a crumbling corner was startling.

In a photo submitted by Aaron Bury, a pile of fallen bricks lies below a hollow in the facade. Bury says he often walks his dog past and noticed the damage on August 21, two days before a large section of the building came down, spilling bricks and debris across Cherokee Street.

"Noticeable cracks ran upward through multiple bricks," he writes in an email.

Owner of the 29-building campus Shashi Palamand told St. Louis Public Radio he thinks lightning storms in April and July probably damaged the building, and he was working with a company to make repairs as recently as a week and a half before the collapse.

“As far as our experts even knew, this was a cosmetic issue, but no one could see what was inside, but it appeared from the outside that it was just the outer layer that was coming off, and it was fixable," Palamand told the station.

The building had been condemned in 2013 for building code violations, but Palamand said he didn't know that until it came out after the building fell.

No one was injured in the collapse, which happened at about 9:30 a.m. on Sunday. The St. Louis Fire Department sent search dogs to the scene, worried that there could be people trapped in the rubble, but no one was inside the warehouse at the time.

St. Louis BWorks had stored about 700 bicycles in the building, and staff and volunteers were often in and out. The nonprofit runs a bike shop in Soulard, which helps fund educational programs for kids, including its Earn-A-Bike program, which provides participants with bicycles at the end of a six-week course on bike safety and maintenance.

"We are extremely lucky that no volunteers or staff had been at the building during the collapse," the organization said in a statement on its website.

BWorks is now accepting donations to replace its ruined inventory. 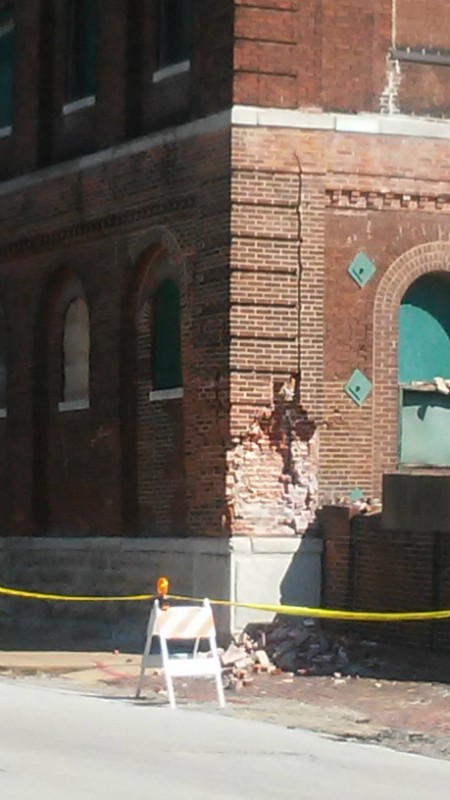 AARON P. BURY
A crack runs up the side, and bricks lie on the street two days before the partial building collapse.
click to enlarge 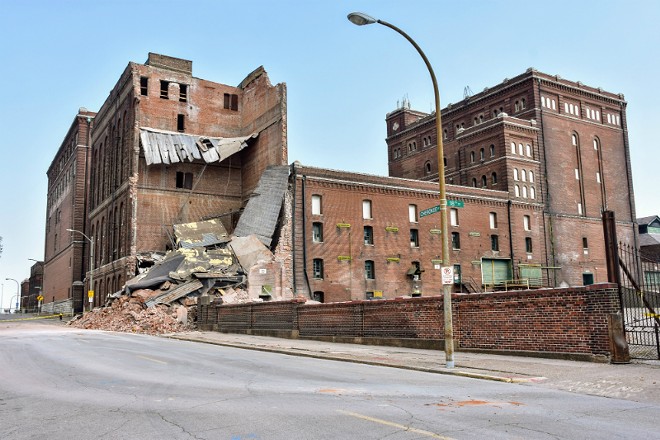 Correction: Building owner Shashi Palamand's name was misspelled and the date his building was condemned was incorrect in the original version of this story. We regret the error.