Photo by Bill Streeter
Panelist assembled for a rivetting discussion of the law and Social Media ethics (click for larger view)
The Social Media Club of St. Louis had their monthly networking event and panel discussion last week at Moulin. I have to give the organizers credit. They seem to consistently pull off some of the best attended events of this kind in St. Louis. Props to Reem Abeidoh and Brad Hogenmiller for pulling off another successful event.

This month's meeting featured a panel discussion on legal ethics in Social Media. The discussion, moderated by former lawyer Matt Homann, ended up being mostly about intellectual property rights online. And while it was an informative discussion, I would have liked the panelists to spend some talking about Creative Commons licensing.
The panel included:

Anyway here are the photos (click the images for a larger view):

Photo by Bill Streeter
View from the roof top bar at Vin de Set where the attendees of the SMCSTL meeting had drinks after the event. 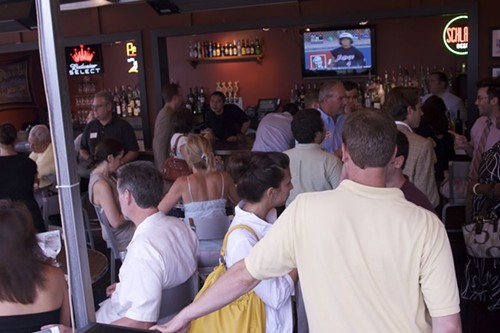 Photo by Bill Streeter
Drinks and networking in the rooftop bar at Vin de Set. Now that's some social media!