Phyllis Schlafly: College Women Get Raped Because There Are Too Many Women in College 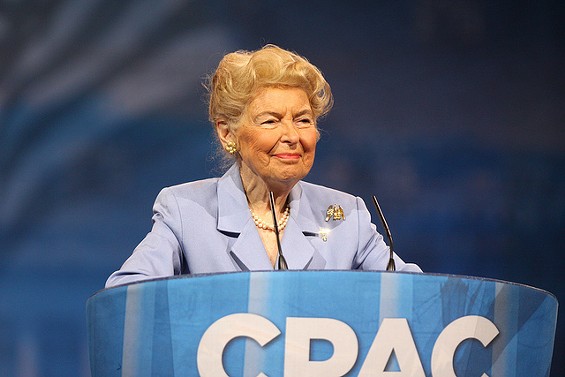 Gage Skidmore via Flickr
Phyllis Schlafly knows how to keep women from getting raped on college campuses: don't let them into college.

Last year, the University of Missouri came under fire for failing to investigate the alleged sexual assault of student athlete Sasha Menu Courey by players on the MU football team until ESPN made her story public three years after her suicide.

In 2013, an 18-year-old student didn't know she'd been raped while intoxicated at a dorm-room party until her 21-year-old assailant started bragging about it on Saint Louis University's campus.

In 2010, four Saint Louis University basketball players were accused of "pulling a train" on a twenty-year-old victim before officials ultimately decided not to prosecute.

Here at Daily RFT, we'd call these assaults sexual violence. Phyllis Schlafly, the St. Louis native and hyper-conservative activist, would call them "sex scandals," and she knows just how to stop them:

Stop letting so many women into college.

In a predictably horrifying editorial for World Net Daily, Schlafly pontificates on a recent controversial story from the New York Times about the changing demographics of college campuses. Since at least 2000, women have made up the majority -- about 57 percent -- of enrollments at American colleges, mostly because women tend to have higher grades and drop out of school at lower rates.

The result, says the New York Times, is a social climate where women compete for a dwindling pool of eligible men. (It's basically the opposite of what happens at Missouri University of Science and Technology, which is three-quarters male and holds a hell of a St. Patrick's Day party, ladies.)

Schlafly finds this to be appalling. When there are more women than men on campus, she says, the beauty of a courtship romance gives way to grinding and gettin' it on.

"Girls do not want to get left out in the cold, so they compete for men on men's terms," Schlafly says in her editorial. "This results in more casual hook-ups that are dead-end encounters with no future and no real romantic relationships."

"The imbalance of far more women than men at colleges has been a factor in the various sex scandals that have made news in the last couple of years," Schlafly says.

So college men would rape less if there weren't so many consensual-sex-seeking college women to prey upon? Another gem of Schlafly wisdom.

Don't worry, though, because Schlafly also provides us with three solutions for halting the problem of women over-enrolling in college:

2. Stop granting college loans. Then students would actually have to spend their time working instead of slutting it up at bars and frat houses. They could work the 48 hours per week needed to pay for their course load and then live, oh I don't know, on the streets?

So thanks, Schlafly (who is an aunt-by-marriage, and otherwise entirely separate from, the brewery founder Tom Schlalfly), for trying, but we have a feeling that blocking women from college, financial assistance and sports won't stop men from raping them.