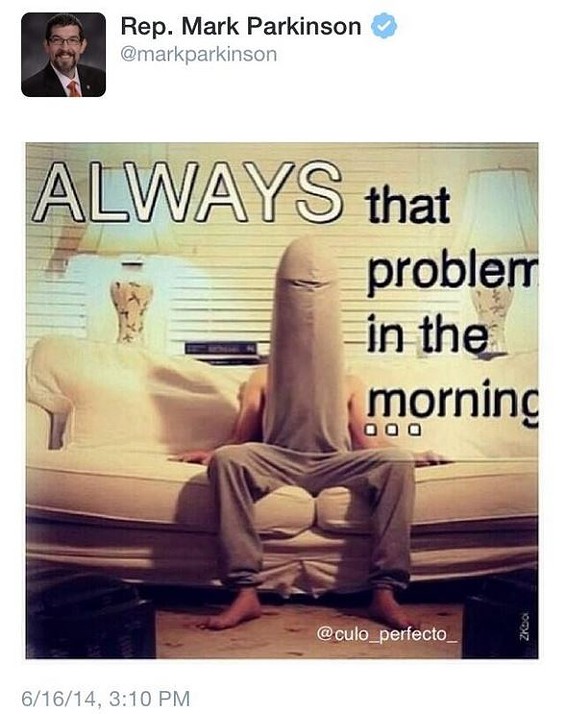 A picture of a man with a mammoth donker appeared on State Representative Mark Parkinson's Twitter feed Monday.

The St. Charles Republican was out talking to voters and tweeting about what a beautiful day it was when, all of a sudden, his account was allegedly hacked and some jokester tweeted a picture of a man with the world's most serious case of morning wood.

It didn't take long for Parkinson to delete the image, but not before PoliticMo's Eli Yokely screengrabbed the gigantic jimmy and tweeted it for all of us to enjoy for the rest of time. Thanks, Eli!

After deleting the image, Parkinson apologized and said he needs to change his password.

Obviously, I need to change my twitter password. Random pics and tweets are being sent that I have never seen before. Apologies!

He also tweeted that he was outdoors and nowhere near his computer, so he couldn't have tweeted the prodigious wang.

@eseider yes, it was somehow compromised. I'm out walking doors and nowhere near my computer!

Although it might not be considered a good idea for politicians like Parkinson to tweet images of colossal throbbers, we have to admit that this was a bit more entertaining than Parkinson's usual tweets, which are mainly about how much he exercises.

Interestingly enough, the esteemed medical information website OMGfacts.com says that morning wood is a "healthy exercise for your man parts."

No word yet if the monster-size member is part of the Missouri GOP's health-care plan.