Pigeon Who Shat on Kings of Leon Bassist Speaks Out

Not every pigeon has the range and dexterity to be able to shit directly into someone's mouth, especially the mouth of a bass player hard at work. But that is exactly what members of the band Kings of Leon say happened to bassist Jared Followill at their show Friday night at the Verizon Amphitheater. The event was so traumatic, the band had to leave the stage immediately.

For a pigeon that can shit with such precision, typing should be no problem. So like celebrities everywhere, it has set up its very own Facebook and Twitter accounts to commune with its many fans.

The pigeon is more chatty over on Twitter where it sends out dispatches as @KOLPigeon and has already amassed nearly 500 followers: 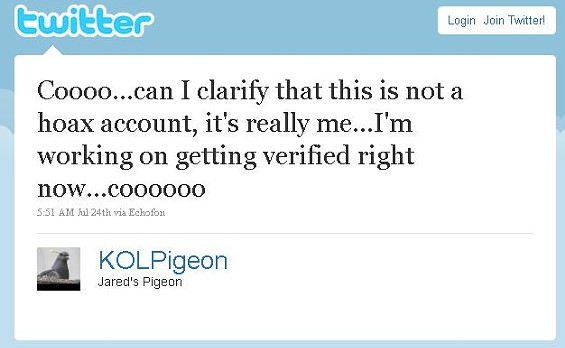