Placenta for Lunch, Anyone? How About You There In Urbana? 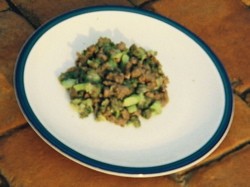 Wikimedia Commons
If you haven't already eaten lunch today, stop reading now. Seriously. Go eat, come back, then dive into something that's sure to make you lose your appetite.
Unreal was browsing news of the weird yesterday when we stumbled upon this whopper of a headline: "Placentas Found In Sewage System."
Apparently someone in the city of Urbana, Illinois -- the city adjacent to Champaign and the University of Illinois -- is dumping human placentas down the drain. The fetal organs are getting caught in the filters at the city's sewage plant. Three placentas have already been found this year. Police are baffled.
While most news outlets pontificated on the source of the placentas (An unscrupulous midwife? A doctor trying to duck the cost of medical waste disposal? Tom Cruise?), Unreal wondered about a different tact.
Often called afterbirth, the placenta is the organ that provides nutrients to a fetus inside the mother's womb. Many societies consider it sacred. In Hawaii, for instance, the placenta was traditionally planted with a tree so the family could watch it grow (the tree, weirdo) along with the newborn child. Other cultures, including those in New Zealand, Costa Rica, Belize, and the Navajo Indians, bury it for various superstitious reasons.
Some people eat it.
The act is called placentophagy and it's not as uncommon as Unreal would like to hope. In fact, humans are the only mammals that don't munch on their post-birth mess. It's a part of traditional Chinese medicine, and it's long been rumored as cure to post-natal depression.
Some people eat it just for the hell of it. Of course, the Internet knows no bounds so there are both written and videotaped accounts of the act.
Here's how a registered nurse described it in the November 1984 issue of Midwives Chronicle and Nursing Notes:

Most newly parturient women feel voraciously hungry following a normal, uncomplicated delivery and, resolving to eat the placenta, I had expected it to satisfy this hunger in my case... However, my own aversion to bloody, raw meat frustrated me from eating the afterbirth immediately postpartum so it was placed in a large dish and left in the kitchen...Despite having convinced myself in pregnancy that it was necessary, for medicinal reasons, to eat the placenta, it was at this point that I nearly threw away my special "birthday cake". Fortunately, I persevered with my intention. The afterbirth was very large and healthy and felt like velvet on the maternal surface...I tried frying a piece - absolutely horrible! I ate a couple of bits and discarded more cooked bits together with the blood loss, umbilical cord and even the frying pan (it was an old one!) The placenta tasted like offal, liver or kidney but the effect was rather like eating a plateful of garden earth - if I didn't think too hard I could swallow it, but I could not bear to chew or taste it.

Wikipedia has a recipe for placenta and broccoli (pictured.) The BBC's News Magazine wrote a piece on placentophagy back in 2006 and their list of ingredients included onion, red pepper, bay leaves, garlic, and tomato sauce---for every one to three pounds of placenta.
Of course, someone took this recipe to heart and had to try it at home. Fortunately, Unreal did not have to take one for the team in this instance. But for the placenta flushing folks of Urbana, Illinois, here's how it's really done*:
*But seriously, don't do this. It can cause Hepatitis B, C, and possibly HIV, according to Wikipedia. And it's disgusting.